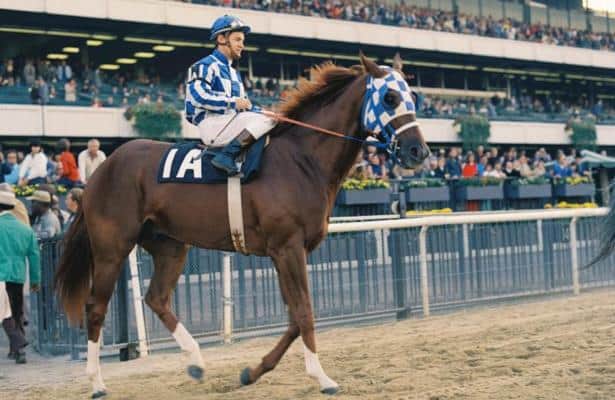 As the longest of the three Triple Crown races, the Belmont Stakes tends to produce more blowout margins of victory than the Kentucky Derby or Preakness. Longer races simply provide more time for superior runners to exert their dominance.

As a result, the history of the Belmont Stakes is dotted with jaw-dropping performances from unforgettable winners. Let’s recall the four most dominant Belmont winners in history, as measured by their margins of victory:

Narrowly edging Conquistador Cielo (1982, 14 lengths) and Bet Twice (1987, 14 lengths) for the #4 slot is Risen Star. The champion 3-year-old male of 1988 parlayed a third-place effort in the Kentucky Derby and a victory in the Preakness into a stunning show of superiority at Belmont Park. Seizing command earlier than usual, Risen Star drew clear with authority around the far turn and down the homestretch to trounce his pursuers by 14 3/4 lengths. His winning time of 2:26 2/5 briefly ranked as the second-fastest Belmont in history and remains in the top five to this day.

The legendary Man o’ War never had to take a deep breath when dominating the 1920 Belmont Stakes by 20 lengths. Facing only one rival, the fiery chestnut started as the 1-20 favorite, led all the way and “was taken under a pull in the final sixteenth,” according to the Daily Racing Form result chart. Nevertheless, Man o’ War completed the race (then held over 1 3/8 miles) in 2:14 1/5, an American record.

Much like Man o’ War, Count Fleet was resoundingly dominant in the 1943 Belmont Stakes. Fresh off decisive victories in the Kentucky Derby and Preakness, Count Fleet started at 1-20 to complete his Triple Crown sweep and had no difficulty bidding his two overmatched pursuers farewell. In front by eight lengths after the opening half mile, Count Fleet “was galloping through the stretch run,” according to the Daily Racing Form, but still reached the finish line clear by 25 lengths in 2:28 1/5, breaking the previous stakes record of 2:28 3/5.

Arguably the greatest racehorse in American history, Secretariat established still-standing stakes records in all three legs of the Triple Crown. But his Belmont Stakes triumph was the pièce de résistance, a performance unparalleled and unprecedented by every metric. After dueling for the lead through blazing splits of 23 3/5, 46 1/5 and 1:09 4/5, Secretariat pulled away through increasingly astonishing fractions of 1:34 1/5, 1:59, and finally 2:24 as he rocketed to the finish line 31 lengths in front. His final time shattered the existing stakes record of 2:26 3/5 and remains the unmatched standard by a full two seconds.