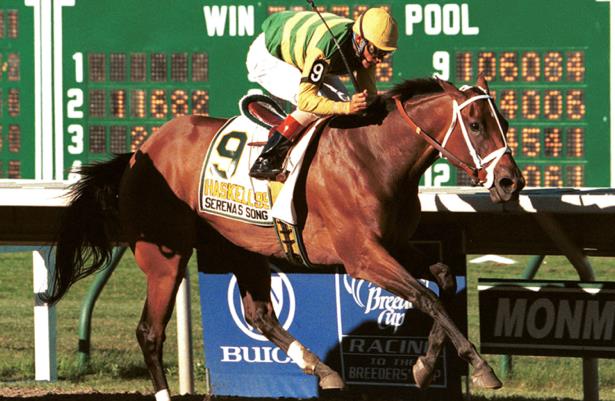 It isn’t every day that a talented 3-year-old filly squares off against male rivals in a top-tier graded-stakes race. But Hall of Fame trainer D. Wayne Lukas has never been afraid to let his best fillies run against elite colts, and 25 years ago, Lukas’ willingness to accept a challenge allowed the tough-as-nails Serena’s Song to secure the signature victory of her Hall of Fame career.

In the summer of 1995, Serena’s Song already had cemented a reputation as one of the decade’s fastest and most fantastic females. Running 10 times as a juvenile, she counted wins in the Oak Leaf (G1) and Hollywood Starlet (G1) as her most notable triumphs, with only a narrow defeat in the Breeders’ Cup Juvenile Fillies preventing her from claiming a championship title. And if anything, Serena’s Song had been even more dominant during the winter and spring of her 3-year-old year, scoring Grade 1 triumphs in the Las Virgenes, Santa Anita Oaks and Mother Goose.

In fact, Serena’s Song was such a force in her own division that Lukas was keen to give her a try on the Kentucky Derby trail. Lukas was no stranger to running fillies in the Derby — he won the roses in 1988 with Winning Colors — and his ambitious approach bore fruit when Serena’s Song crushed future Derby runner-up Tejano Run in the 1 1/8-mile Jim Beam (G2), winning by 3 1/2 lengths with a 114 Beyer speed figure.

Serena’s Song subsequently faltered in the Derby itself, fading down the homestretch after carving out fast fractions. The 1 1/4-mile distance might have been a furlong beyond her best, an interpretation that later took on added credence when Serena’s Song weakened to finish second in the 1 1/4-mile Coaching Club American Oaks (G1) against fellow sophomore fillies.

Yet these two defeats arguably set the stage for Serena’s Song’s greatest performance. The Coaching Club American Oaks took place on July 8, and the traditional next step for a talented 3-year-old filly would have been to target the 1 1/4-mile Alabama (G1) on Aug. 12 at Saratoga.

But rather than send Serena’s Song over 1 1/4 miles again, Lukas elected to wheel her back on short rest in the July 30 Haskell Invitational Handicap (G1) against males at Monmouth Park. No filly had ever prevailed in the prestigious 1 1/8-mile race, but the distance was ideal for Serena’s Song, and Lukas knew his tough filly could handle the quick turnaround.

So when July 30 rolled around, there was Serena’s Song lining up against 10 male rivals in the Monmouth Park starting gate. With regular rider Gary Stevens in the saddle, Serena’s Song was favored at 3-2, with bettors possibly remembering her resounding victory in the Jim Beam and her perfect 3-for-3 record racing 1 1/8 miles.

Also popular in the wagering was Pyramid Peak, fresh off a victory in Monmouth’s Long Branch Stakes and winner of the historic Flamingo (G3) during the winter. Like Serena’s Song, Pyramid Peak had struggled in the Kentucky Derby, finishing 1 1/2 lengths behind the filly in 17th place. But with a prep victory at Monmouth under his belt, the improving colt figured to deliver a sharper effort in the Haskell.

The gates opened at 5:45 p.m. ET, with ESPN broadcasting the action, and Serena’s Song showed a bit more early reserve than usual, settling in third place as longshot John and Pat briefly dueled for the lead with Reality Road through a :22.74 opening quarter.

But Serena’s Song wasn’t content to track the pace for long. Early on the backstretch she edged closer to Reality Road, applying pressure through a quick half-mile in :46.18. The only problem? Reality Road wasn’t capable of accepting the challenge and soon retreated, leaving Serena’s Song alone on the lead with nearly half a mile remaining to run.

Gary Stevens had a choice to make. He could attempt to slow down his flying filly and give her a breather on the far turn, opening the door for her pursuers to catch up. Or he could ask Serena’s Song to maintain a testing pace and blow the race apart before the turn for home, with the risk of his mount growing leg-weary down the homestretch.

Stevens decided the advantage in hand was worth maintaining, so around the far turn he urged Serena’s Song to accelerate, and the daughter of Rahy eagerly opened up a daylight advantage over the pack. At the top of the stretch she was well in command, and by the time she strode to the eighth pole she was clear by five lengths.

But Serena’s Song’s early exertions came at a price. Understandably, her tour-de-force display of speed couldn’t be maintained forever, and in the final furlong she began to tire. What appeared one moment to be an insurmountable lead started shrinking at an alarming rate as Pyramid Peak — bursting into the fray on the outside — started closing the gap with ground-devouring strides.

Even track announcer Larry Collmus was surprised by the sudden shift in dynamics. “Gary Stevens is riding Serena’s Song to a winning effort in the Haskell,” announced Collmus at the eighth pole, before adding: “It’s going to be the filly over the boys — but now Pyramid Peak is coming on!”

Pyramid Peak was no slouch; later in the summer he would finish second in the Travers (G1), and by the time he retired he’d scored a trio of graded stakes victories. But though he came charging hard down the Monmouth Park homestretch, he was no match for the determination of Serena’s Song. Under urging from Stevens, Serena’s Song refused to fold and held on to win by three-quarters of a length in 1:48.94.

Serena’s Song’s victory was widely praised, and Lukas was quick to credit her remarkable durability as a big factor in her success. “We feel she thrives on the activity. She doesn’t like the couch-potato attitude. … It’s again knowing the horse, you can’t do it with every horse,” Lukas remarked in a story in the Asbury Park Press. “But you can do it with this one. She’s tough.”

“Tough” might be an understatement. Serena’s Song eventually retired with 18 wins, 11 seconds and 3 thirds from 38 starts, all packed into the span of three seasons. She left the sport with earnings of $3,283,388, then a record among fillies and mares, and was inducted into the National Museum of Racing’s Hall of Fame in 2002.

Serena’s Song likely would have been elected to the Hall of Fame even without her refuse-to-lose victory in the Haskell. But memories of her unwavering determination down the Monmouth Park homestretch surely enhanced her case.