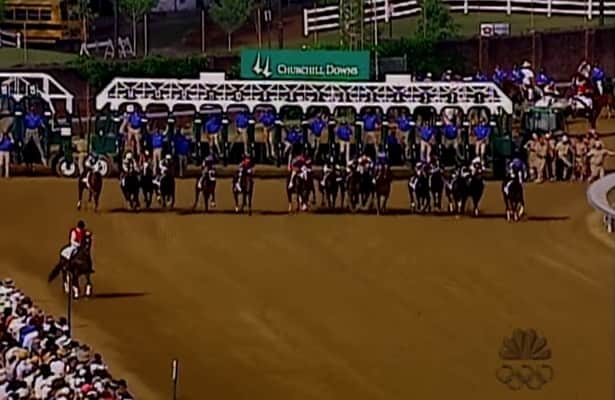 Ask racing fans to name the fastest winning times in the history of the Kentucky Derby, and you are sure to hear references to Northern Dancer’s groundbreaking 2:00 clocking and Secretariat’s unmatched standard of 1:59.40.

But what about the fastest pace fractions in the annals of Derby history? These records don’t receive as much attention, though in some respects, they’re just as remarkable and eye-catching as the winning times.

Top Avenger was an excellent racehorse, no doubt about it. Over the course of six seasons, he won 23 of his 57 starts, including 11 stakes and three graded stakes. But Top Avenger was best as a sprinter, which became readily apparent in the 1981 Kentucky Derby. Facing 20 rivals, the Texas-bred star hooked up in a speed duel with future Preakness runner-up Bold Ego and promptly ran the opening quarter mile in :21.80. Yes – :21.80.

No other Kentucky Derby before or since has featured a sub-:22 opening quarter, so the fact that Top Avenger faded to finish 19th is almost irrelevant. Simply by sprinting harder than any Kentucky Derby contender in history, Top Avenger has a unique place in the record books.

Similar to Top Avenger, Songandaprayer occupies a category of his own in the lore of the Kentucky Derby. He’s the only horse to ever shade :45 seconds for the opening half mile, clocking the distance in :44.86 when carving out a thoroughly ambitious pace in the 2001 Kentucky Derby.

Strangely, Songandaprayer was far from being a pure sprinter. Leading up to the Run for the Roses, he won the 1 1/16-mile Fountain of Youth (G2) and placed second in the 1 1/8-mile Blue Grass (G1). But for whatever reason, the dynamics of the Kentucky Derby pushed Songandaprayer to flaunt speed unseen since he’d broken his maiden sprinting five furlongs as a spring juvenile at Monmouth Park. The strategy was unsuccessful – Songandaprayer faded to finish 13th – but at least he earned a place in the record books.

The Churchill Downs main track was ultra-fast for the 2001 Kentucky Derby, which might explain why Songandaprayer – after rocketing the opening half mile in :44.86 – was able to maintain his speed through six furlongs in a remarkable 1:09.25.

Through the years, we’ve seen some fast six-furlong fractions in the Kentucky Derby. In fact, seven pacesetters have gone under 1:10. But Songandaprayer’s clocking remains the record by a lofty 0.34, with no one else coming close to matching his standard.

It’s also worth noting how Songandaprayer’s record pace led to another historically significant clocking. His unprecedented half-mile and six-furlong fractions set the stage for stretch-running Monarchos to win the race in 1:59.97, joining Triple Crown winner Secretariat as the only horses in history to complete the Kentucky Derby in under 2:00.

As is evident from the examples above, setting a record pace in the Kentucky Derby is typically a recipe for an off-the-board finish. But no one told that to Spend a Buck, who put on a front-running clinic in the 111th “Run for the Roses.” Sprinting to a clear early lead under jockey Angel Cordero Jr., Spend a Buck led by half a dozen lengths through a half mile in :45.80, six furlongs in 1:09.60, and a record-setting mile in 1:34.80.

Incredibly, Spend a Buck never tired. Instead, he stayed on strongly down the homestretch, defeating multiple Grade 1 winner Stephan’s Odyssey and champion juvenile Chief’s Crown by 5 1/4 lengths in 2:00.20—the fourth-fastest Kentucky Derby in history.

Do you think we’ll see a record pace in the 2021 Kentucky Derby? Or is a slow pace more likely to unfold?