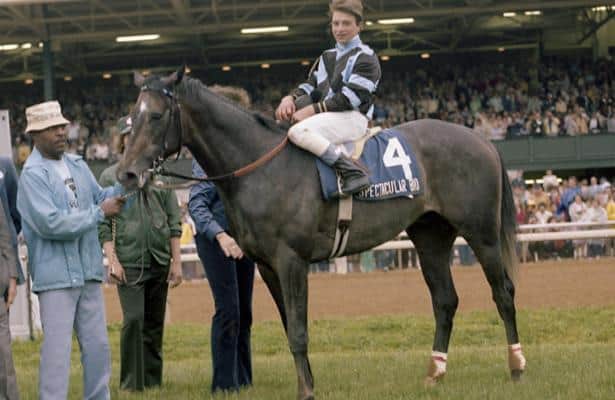 But looking back through history, which Fountain of Youth winners stand out as the cream of the crop? Here’s my take on the five most memorable winners. From the bottom up, we have …

The champion 2-year-old male of 1987 never nabbed a classic or a Breeders’ Cup race, but he did win or place in seven Grade 1 races over the course of two busy seasons. Victorious in the Futurity (G1) and Champagne (G1) as a juvenile, Forty Niner showed impressive determination in the Fountain of Youth, battling along the rail to win by a nose over stubborn rival Notebook. Forty Niner later added triumphs in Haskell (G1) and Travers (G1) to his decorated resume, along with a narrow runner-up effort in the Kentucky Derby (G1).

Tim Tam was nothing less than sensational during a super-busy sophomore season. Between Jan. 17 and June 7 he won 10 of his 13 starts, including seven stakes. A two-length triumph in the Fountain of Youth served as a steppingstone to spring successes Florida Derby, Kentucky Derby, and Preakness, stamping the Calumet Farm homebred as the champion of his division. Sadly, an injury suffered when finishing second in the Belmont prevented Tim Tam from sweeping the Triple Crown and prompted his retirement.

The champion 3-year-old male of 1995 kicked off his signature season in the Fountain of Youth, rallying from seventh place to win by a determined neck. Thereafter, the D. Wayne Lukas trainee went on a tear, prevailing in the Florida Derby (G1), Kentucky Derby (G1), Belmont (G1), Travers (G1), Swaps (G2) and Kentucky Cup Classic Handicap. Only a close third in the Preakness (G1) prevented Thunder Gulch from joining the Triple Crown club and earning a place among the all-time greats.

The undisputed king of Fountain of Youth winners is Spectacular Bid, who widely ranks among the best horses to ever grace the sport. Victorious in 26 of his 30 starts, Spectacular Bid accumulated 14 Grade 1 wins during his Hall of Fame career, including decisive scores in the Kentucky Derby and Preakness. The great gray carried as many as 132 pounds to victory and concluded his 1980 Horse of the Year campaign with a walkover victory in the Woodward (G1) — where he ran 1 1/4 miles all by himself in a solid 2:02 2/5, just because he could.