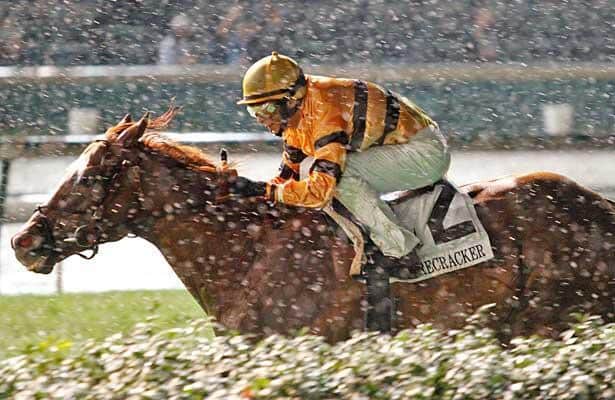 Six-time Eclipse Award winner and Hall of Fame inductee Wise Dan ranks among the best horses to ever set foot on a racetrack. Known for his brilliance and versatility, the two-time Horse of the Year compiled a phenomenal 31: 23-2-0 resume across five seasons of racing, including a near-perfect 15-for-16 record on turf.

On Saturday, Churchill Downs will celebrate Wise Dan’s legacy with the running of the $300,000 Wise Dan Stakes (G3), a race Wise Dan won twice when it was known as the Firecracker Handicap. Here, I celebrate the great gelding’s career by ranking his five greatest victories.

This task, of course, is a difficult one. Wise Dan retired with 20 stakes wins and 11 Grade 1 wins to his credit, so choosing five career highlights leaves out plenty of memorable moments. It’s a testament to Wise Dan’s talent that I have excluded his victory in the 2013 Breeders’ Cup Mile and his tenacious success in the 2014 Bernard Baruch Handicap, his first start back from colic surgery.

But I don’t think many fans will dispute that these five races rank among Wise Dan’s greatest:

Given Wise Dan’s reputation as an elite turf miler, it’s easy to forget he also was an accomplished Grade 1 winner on dirt. Just check out his romp in the 2011 Clark Handicap (G1) at Churchill Downs, in which Wise Dan tracked the early tempo before rocketing the final three furlongs in a terrific :36.15 to crush a deep field by 3 3/4 lengths.

Wise Dan also was a star over synthetic tracks – there really wasn’t any surface he couldn’t handle. In the 2012 Ben Ali Stakes (G3) racing 1 1/8 miles at Keeneland, Wise Dan settled third in the early going, opened a daylight lead on the backstretch and rocketed home in :35.56 to crush future champion grass male Big Blue Kitten by 10 1/2 lengths. Just as impressively, Wise Dan reached the finish line in 1:46.63, setting a track record that stood through the end of Keeneland’s synthetic era.

Gauged from a perspective pure brilliance, it is hard to top Wise Dan’s effortless victory in the 2013 Woodbine Mile (G1). The competition was deep – all five of his rivals were past or future graded-stakes winners, including Trade Storm, who would win the 2014 Woodbine Mile. Yet Wise Dan trounced this top-class field, cruising home under virtually no urging at all to score by 3 1/2 lengths in the still-standing course-record time of 1:31.75.

Wise Dan frequently flaunted his brilliance, but he also was a fighter with the heart of a champion. Never was this more apparent than in the 2013 Firecracker Handicap (G2) at Churchill Downs. Racing one mile over yielding turf in the midst of a rainstorm, Wise Dan picked up top weight of 128 pounds – 11 to 13 pounds more than his rivals – and delivered an unwavering performance.

After saving ground inside of rivals, Wise Dan rallied tenaciously through a practically non-existent opening along the rail, brushing the hedge in his quest to find racing room. The conditions were so challenging, Wise Dan stumbled in late stretch. But he nevertheless overcame the odds to beat future Grade 1 winner and Breeders’ Cup Dirt Mile runner-up Lea by two lengths. It’s no wonder why Churchill Downs eventually renamed the Firecracker Handicap in Wise Dan’s honor.

A stellar field assembled for the 2012 Breeders’ Cup Mile at Santa Anita, and yet Wise Dan won with authority in arguably the best effort of his Hall of Fame career. After saving ground right behind a strong pace, Wise Dan shifted outside of rivals, rolled to the front and prevailed by 1 1/2 lengths in the course-record time of 1:31.78.

Wise Dan’s final time was remarkable, but the caliber of competition he defeated was even more impressive. His conquered rivals included Kentucky Derby (G1) and future Dubai World Cup (G1) winner Animal Kingdom, future Breeders’ Cup Turf Sprint (G1) hero Obviously, Excelebration, Suggestive Boy and Moonlight Cloud, who combined to win 14 Group or Grade 1 races during their decorated careers. Plus, there was Grade 1 winner Jeranimo and multiple graded stakes winners Mr. Commons and WIllcox Inn. It can be argued Wise Dan defeated one of the strongest fields ever assembled for the Breeders’ Cup Mile.

Which of Wise Dan’s many career highlights would you rank as his greatest?