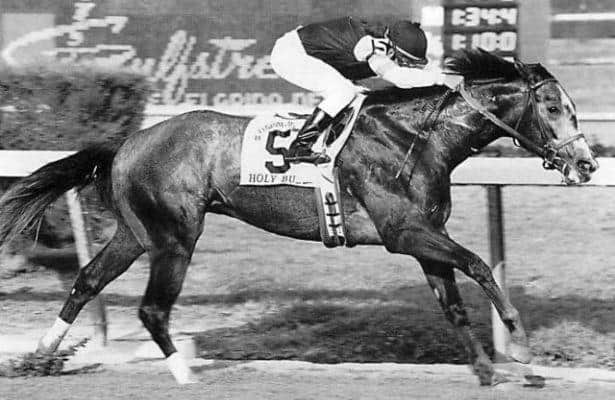 Every once in a while, it’s worth looking back on the career of 1994 Horse of the Year Holy Bull to appreciate just how brilliant he really was. And what better time to take a trip down memory lane than the last week of January, with the running of the Holy Bull (G3) at Gulfstream Park just a few days away?

Singling out Holy Bull’s greatest races isn’t easy — after all, he was an 11-time stakes winner with half a dozen Grade 1 wins to his credit. But I feel safe stating that the following four races, in one order or another, rank as Holy Bull’s most magnificent efforts.

Although Holy Bull posted many flashy victories during his Hall of Fame career, it was his gutsy victory in the 1 1/4-mile Travers (G1) that proved his greatness. After dueling hard for the lead through fast fractions of :22.83 and :46.35, Holy Bull opened up a daylight lead halfway through the race. By the time he reached the homestretch, the gray colt was understandably growing leg-weary.

But Holy Bull wasn’t about to give up. Even when challenged by future Breeders’ Cup Classic winner Concern, Holy Bull refused to yield, instead showing the heart of a champion to battle on and prevail by a neck. Preakness and Belmont winner Tabasco Cat finished 17 lengths behind the top pair, a testament to how well Holy Bull (and Concern) performed.

Just four weeks after his gut-wrenching Travers victory, Holy Bull came back to trounce older rivals in the 1 1/8-mile Woodward (G1). Showing absolutely no signs of wear or tear, Holy Bull drew off to win by five lengths in 1:46.89. Even more remarkable was the caliber of competition Holy Bull defeated, namely…

Talk about an elite field!

There was nothing dramatic about Holy Bull’s romp against older rivals in the 1-mile Metropolitan Handicap. Running back just 23 days after an uncharacteristic 12th-place finish in the Kentucky Derby, Holy Bull sprinted to the front through splits of :22.93 and :45.15, then powered clear to beat future Breeders’ Cup Sprint winner Cherokee Run by 5 1/2 lengths.

There’s a reason that Gulfstream Park hosts the race named in Holy Bull’s honor. The great gray won three stakes races over the Florida track, most notably a strong renewal of the Florida Derby. Leading by daylight from start to finish, Holy Bull flew to the finish line in a snappy 1:47.66, beating 13 rivals (including future Kentucky Derby winner Go for Gin) by 5 3/4 lengths.