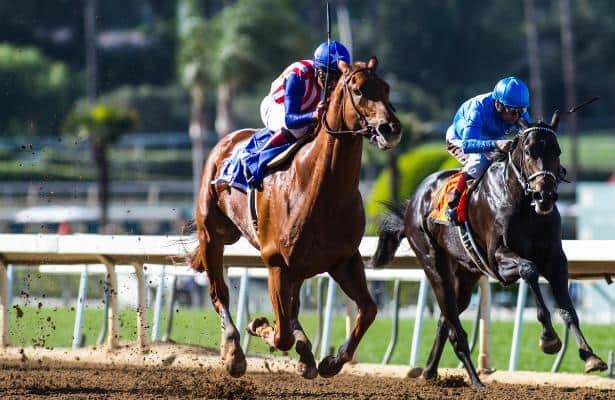 Hall of Fame trainer Bob Baffert is widely expected to win Saturday’s Grade 2 San Felipe at Santa Anita with either Life Is Good or Medina Spirit, two major players on the road to the 2021 Kentucky Derby. But it would hardly be the first time Baffert has saddled a San Felipe winner.

Baffert has won the San Felipe seven times since 1999. Let’s rank Baffert’s San Felipe winners based on their career accomplishments:

Baffert’s first San Felipe champ was a capable colt, placing in the Hollywood Futurity (G1) and Santa Anita Derby (G1) before running fourth in the Kentucky Derby (G1). But the San Felipe was the only graded stakes win of Prime Timber’s 17-race career, and the field he beat at Santa Anita wasn’t the deepest.

Although never quite up to competing at the Grade 1 level, Preachinatthebar held up well over the course of five seasons, winning nine of his 32 starts. A tenacious nose victory in the San Felipe was his first graded stakes success, and he later added victories in the Tokyo City Handicap (G3) and Texas Mile (G3) to his solid resume.

Four starts, four wins. Mastery looked like a star in the making after rattling off victories in the Bob Hope (G3), Los Alamitos Futurity (G1) and San Felipe, counting graded stakes winners Gormley, Irap and Bobby Abu Dhabi among his beaten rivals. But Mastery suffered an injury just past the finish line of the San Felipe and retired to stud without racing again.

The imposing Dortmund was a sensation through his first six starts, going undefeated while sandwiching the San Felipe among triumphs in the Santa Anita Derby (G1), Los Alamitos Futurity (G1) and Robert B. Lewis (G3). He continued to compete with aplomb against Grade 1 company another year and a half, with a third-place finish in the Kentucky Derby among the highlights.

As far as individual career highlights go, 2020 Horse of the Year Authentic is arguably the greatest of Baffert’s San Felipe winners. After beating champion Storm the Court and future Grade 1 winner Honor A. P. in the San Felipe, Authentic blossomed beautifully during the second half of his 3-year-old season, winning the Haskell (G1) before adding a postponed edition of the Kentucky Derby and the Breeders’ Cup Classic to his accomplished resume.

Although Point Given was beaten in the Kentucky Derby and missed the Breeders’ Cup Classic, the overall breadth of his resume gives him the nod over Authentic. An accomplished 2-year-old who lost the Breeders’ Cup Juvenile by a nose, Point Given counted the Preakness, Belmont, Haskell (G1), Travers (G1), Santa Anita Derby (G1) and Hollywood Futurity (G1) among the highlights of his Hall of Fame career. A flashy 2 1/4-length score in the San Felipe (G2) was arguably the least impressive victory of his 2001 Horse of the Year campaign.