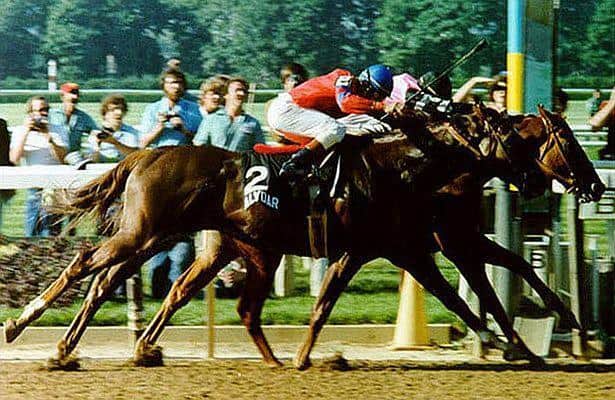 Two-time Horse of the Year and Hall of Fame inductee Affirmed ranks as one of racing’s all-time greats. The tenacious chestnut is best remembered for his heroic sweep of the 1978 Triple Crown, when he out-battled arch rival Alydar in all three legs to win the series by an aggregate margin of less than two lengths.

But Affirmed’s stellar 22-for-29 lifetime record is dotted with major highlights often overshadowed by his Triple Crown campaign. Since Santa Anita is celebrating Affirmed’s legacy with the running of the Affirmed Stakes (G3) on Sunday, let’s take a trip back through history and rank Affirmed’s four greatest non-classic victories:

We could go a lot of directions for the fourth spot on our list, but Affirmed’s triumph over Alydar in the 1977 Futurity seems fitting, since it’s a race that exemplifies Affirmed’s refuse-to-lose attitude. Passed at the top of the stretch by Alydar, Affirmed could have given in and settled for second place. Instead, he battled back to win the historic prize by a nose in the stakes-record time of 1:21 3/5.

The Hollywood Gold Cup wasn’t the flashiest of Affirmed’s victories; he had to dig deep to beat Italian Derby winner Sirlad by 3/4 of a length after a start-to-finish duel. But the bare margin of victory is deceiving, because Affirmed toted 132 pounds (12 more than Sirlad) and flew to the finish line in 1:58 2/5, just 1/5 off the stakes record.

One of Affirmed’s most visually impressive victories came in the 1979 Santa Anita Handicap. Facing seven rivals while carrying 128 pounds, Affirmed tracked a solid pace, took over early on the far turn, and pulled clear to dominate a deep field (including Grade 1 winners Tiller and Exceller) by 4 1/2 lengths. His final time of 1:58 3/5 established a stakes record that stood until 2014.

In a battle for Horse of the Year honors between two indisputable legends, Affirmed showed the tenacity of a champion in the 1979 Jockey Club Gold Cup. Facing Kentucky Derby (G1) and Preakness (G1) winner Spectacular Bid – the future 1980 Horse of the Year – Affirmed led for most of the journey before turning back Spectacular Bid’s inside challenge to score by three-quarters of a length. 1979 Belmont (G1) winner Coastal finished third in a small but superb field.

Which of Affirmed’s non-classic wins would you rank as your favorite?