Flashback: Dr. Fager goes out on top in 1968 Vosburgh Handicap 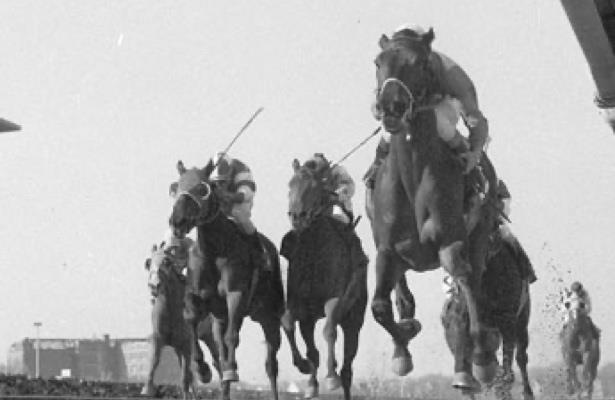 The date was Nov. 2, 1968. With the racing season winding down and the New York winter rapidly approaching, seven Thoroughbreds lined up in the Aqueduct starting gate to compete for one of the season’s final lucrative prizes: the $57,000 Vosburgh Handicap.

Nowadays, the Vosburgh is a prominent prep for the Breeders’ Cup Sprint, providing East Coast sprinters with a steppingstone toward the season-ending championship. But back in 1968, the Breeders’ Cup hadn’t been conceived, and the Vosburgh was the championship — the defining sprint of the season, annually attracting some of the fastest Thoroughbreds from across the country.

And in 1968, the Vosburgh attracted one of the fastest Thoroughbreds in history.

As the horses entered the starting gate, all eyes were focused on the indisputably great Dr. Fager. The phenomenal 4-year-old already had compiled a staggering resume, defying the standards of mortal might with a brigade of unprecedented achievements.

Such adjectives and accolades are hardly misplaced. Already, Dr. Fager had showcased his talent as an elite sprinter: He’d won the 1967 Vosburgh by 4 1/2 lengths in the snappy time of 1:21 3/5. Yet his abilities weren’t bounded by distance or surface, as a sampling of his 1968 resume vividly demonstrates. Just consider how Dr. Fager …

• … crushed the 1-mile Washington Park Handicap by 10 lengths in 1:32 1/5, establishing a still-standing American record for a mile on dirt.

• … transitioned to turf and battled to victory in the 1 3/16-mile United Nations Handicap.

The Vosburgh would mark the final start of Dr. Fager’s illustrious career, and trainer John Nerud hoped to see the Tartan Stable superstar go out on a high note. According to the book "Dr. Fager: Racing’s Top Record-Setter," by Steve Haskin, Nerud requested that racing secretary Tommy Trotter assign Dr. Fager an unprecedented 145 pounds for his farewell race, allowing the colt to cement his legacy in resounding fashion.

“I think every champion worthy of the name ought to prove himself carrying weight,” Nerud was quoted as saying in The Times Record of Troy, N.Y., before the race.

Trotter declined to assign 145 pounds, but he did burden Dr. Fager with 139, described by the New York Daily News as the largest impost Trotter ever had allocated in a race other than the Fall Highweight Handicap. With regular rider Braulio Baeza in the saddle, Dr. Fager would concede 12 to 34 pounds to his six rivals, with Kissin’ George coming closest to the champion with a 127-pound assignment.

Kissin’ George was a fine sprinter in his own right. The fast 5-year-old already had won five stakes races in 1968 and entered the Vosburgh off an easy victory in the Sport Page Handicap at Belmont Park. Early speed was Kissin’ George’s forte, and when the gates opened at Aqueduct he set off on a mission to challenge Dr. Fager for early supremacy.

Theoretically, the early tempo was modest enough. Dr. Fager and Kissin’ George traversed the opening quarter-mile in :22 1/5, a solid if not remarkable time for a 7-furlong sprint. But the fraction was deceptively quick; Haskin notes how the racing surface at Aqueduct already had been prepped for winter, with an extra layer of dirt deepening the cushion and slowing down the track.

In any case, the pace soon intensified dramatically. As the fleet front-runners flew around the far turn, they rocketed the second quarter-mile in :21 3/5, completing the half-mile in a blistering :43 4/5. There was no turning back — they were committed to staying the course, dueling until one of them cracked from the pressure.

Or at least, that’s how it seemed on paper. The visuals told a slightly different story. Despite the fast fractions, Dr. Fager was traveling easily, with Baeza taking a patient approach to the race.

“I wasn’t thinking about time,” remarked Baeza in the New York Daily News. “I just wanted to win. He broke good and I took hold to let him settle into stride because of the weight. I didn’t push him when we got to the quarter pole.”

This stood as quite a contrast to Kissin’ George. Though the challenger was running a winning race in his own right, he was clearly overmatched against the power of Dr. Fager. As the field approached the homestretch, Kissin’ George was put to urging by jockey Bill Boland in an effort keep up with the formidable favorite. But Kissin’ George had nothing left to offer.

“Boland asked his horse for more and he didn’t get it,” Baeza continued. “Then I waved my whip by my horse’s head and he just drew away.”

And draw away he did. With Kissin’ George conquered, the run down the homestretch was nothing more than a procession for the champion. By the time he flashed past the eighth pole in a blazing 1:07 4/5, Dr. Fager was clear by three lengths, and he wasn’t finished yet. Though he was never asked for his best — the Daily Racing Form chart comment noted he was “under [a] mild drive” — Dr. Fager flew through the final furlong in :12 2/5 to win by six lengths in 1:20 1/5, shattering the track record of 1:21 1/5 while falling just 1/5 shy of the world record.

His year was complete, and so was his career. When year-end awards were handed out, Dr. Fager was amply rewarded with four championship titles: Horse of the Year, champion handicap horse, champion sprinter, and champion turf horse. No horse before or since has won a comparable set of titles in a single season.

“He is the greatest horses I’ve ever been around,” said Nerud in the Daily News. “Any horse who looks him in the eye is gone. He has won at a distance, he has won sprinting, and he has carried weight. He is the greatest.”