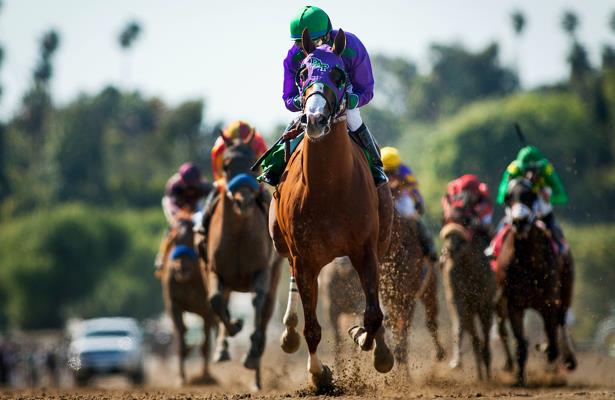 It’s Saturday, April 5, 2014. Eight of California’s fastest 3-year-old Thoroughbreds are heading to the Santa Anita starting gate for the $1 million Santa Anita Derby. The historic 1 1/8-mile race has drawn a quality field of young stars prepping for the coveted Kentucky Derby, but most folks are focusing on a striking chestnut by the name of California Chrome.

His pedigree is obscure. The California-bred youngster is a son of minor stakes winner Lucky Pulpit out of the low-level claimer Love the Chase, a mare acquired for just $8,000 in the midst of her unremarkable racing career.

But California Chrome has risen above his humble lineage to become one of the most electrifying horses in training. He’s won three straight races out west, including the San Felipe Stakes, in which he crushed his opposition by 7 1/4 lengths while clocking 1 1/16 miles in a scintillating 1:40.59. Folks are calling California Chrome a key contender to win the Kentucky Derby, and his connections — trainer Art Sherman and owners/breeders Steve Coburn and Perry Martin — aren’t afraid to join the conversation.

“When these guys first sent me the horse, they said ‘Here’s your Derby horse,’ ” Sherman said in the days before the race. Other ownership interests are eager to get involved, but Coburn and Martin aren’t ready to sell; they turn down an offer of $6 million to purchase a controlling interest in their budding star.

It’s a gamble, but one destined to pay off in a big way.

The Santa Anita starting gates open at 3:46 p.m. California Chrome, adorned with blinkers and slotted in post five, breaks a step slowly and is briefly squeezed between rivals during the run to the first turn.

But veteran jockey Victor Espinoza doesn’t panic. Rather than rush the favorite to accelerate, Espinoza allows California Chrome to gather his stride, and the chestnut colt gradually recovers to settle in second place through a quick opening quarter in :22.89. California Chrome is racing between runners, just to the outside of longshot Dublin Up but clear of Candy Boy and Hoppertunity, two formidable opponents with graded stakes wins on their resumes.

On paper it’s supposed to be a competitive showdown, but the visuals suggest otherwise. California Chrome exudes power, and Espinoza radiates confidence. Without being asked, California Chrome moves to the front through splits of :47.02 and 1:10.81. Candy Boy, tracking in third place, is under urging but losing ground. Hoppertunity is advancing between runners, but California Chrome is slipping away, extending his lead without any special encouragement from his rider.

Finally, at the top of the lane, Espinoza asks California Chrome to accelerate, and the response is breathtaking. The budding California-bred star blasts off like a rocket, sprinting clear of Hoppertunity and Candy Boy with effortless strides. In the blink of an eye California Chrome is five lengths in front, and Espinoza eases him up across the finish line, wisely leaving a little in the tank for the first Saturday in May. Even still, California Chrome hits the wire in 1:47.52, the fifth-fastest Santa Anita Derby ever run.

It’s a magnificent performance, receiving accolades all around. Racing analysts declare California Chrome a standout favorite to win the Kentucky Derby, and speed figure makers award eye-catching numbers for his effort — a 107 from Beyer, a 106 from Brisnet, and a 110 by Equibase.

But all the numbers — the metrics, the stats — can’t quite define the brilliance and visual authority of California Chrome’s dominant triumph. Only Sherman can find the words to succinctly sum it up:

“Right now, he’s kind of freaky and I’m enjoying it,” he said. “I can’t believe the races I’ve been seeing.”

Three years and half a dozen Grade 1 wins later, California Chrome retired to stud with two Horse of the Year titles, a Kentucky Derby trophy, and a record-breaking $14,752,650 in earnings under his belt. It was a freaky run, no doubt — and unquestionably enjoyable for California Chrome’s fans.