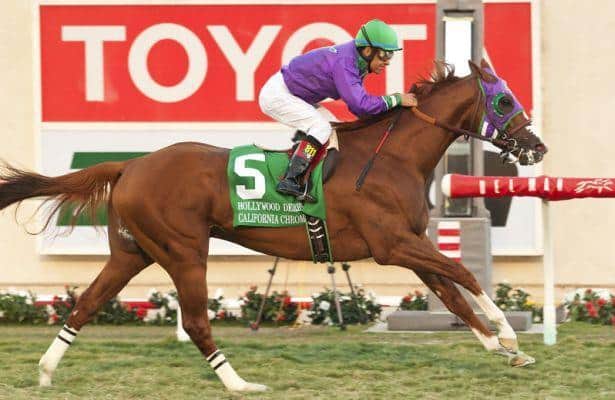 The Hollywood Derby transitioned from dirt to turf in 1981, and from Hollywood Park to Del Mar in 2014. Yet neither shift has dampened the overall quality of the race, as evidenced by the pivotal role the Hollywood Derby played in determining 2014 Horse of the Year honors.

But there was a third Horse of the Year contender still in the hunt: California Chrome. The star of the spring had posted eye-catching victories in the Santa Anita Derby (G1), Kentucky Derby and Preakness to emerge as a division standout, but a fourth-place effort in the Belmont Stakes (G1) sent California Chrome to the sidelines with a minor hoof injury.

Thereafter, California Chrome seemed to struggle. After finishing a non-threatening sixth behind Bayern in the Pennsylvania Derby, California Chrome showed flashes of his old form in the Breeders’ Cup Classic. But he came up short in a three-horse photo finish, failing by a neck to catch the leaders while crossing the wire third.

But then California Chrome’s connections hatched a bold plan — why not bring California Chrome back for the Hollywood Derby in an effort to reverse the losing skid and snatch a fourth Grade 1 win for the season?

Considering California Chrome had never previously run on turf, the strategy seemed ambitious. And with the benefit of hindsight, we can see California Chrome was facing a downright challenging task. Five horses turned out to oppose the popular chestnut in the Hollywood Derby, and the quality of competition was fierce.

The filly Lexie Lou was the most accomplished of the lot. Fresh off a victory in the Autumn Miss (G3), the six-time stakes winner previously had beaten males in the Queen’s Plate Stakes and eventually would add three more stakes triumphs to her glowing resume.

But Lexie Lou was far from the only formidable runner in the mix. Sawyer’s Hill entered fresh off runner-up efforts in the Del Mar Derby (G2) and Twilight Derby (G2). The graded stakes-placed Talco would go on to win the 2015 Shoemaker Mile (G1). Belmont Derby third-place finisher Flamboyant would nab three graded stakes wins by the end of his career, and even Cabral had placed against stakes company.

It was a deep field, no doubt. Yet California Chrome — racing over a completely unfamiliar surface — beat them all for fun.

The only drama came during the first half of the race. Breaking alertly from post five, California Chrome cruised to the front under regular rider Victor Espinoza, only to be challenged with a rush around the first turn by Sawyer’s Hill. The latter was eager to roll and soon opened up a four-length lead through a half-mile in :46.95.

“The horse inside (Sawyer’s Hill) didn’t break as fast as I thought he would, and my horse went right to the front,” Espinoza later told Del Mar. “I thought the other horse would go, but I was ready for most anything happening there at the beginning. I let the other horse go by going into the first turn, and I was happy right where I was. He was going easy.”

Indeed, California Chrome was a picture of contentment settling in second position, with a sizable gap back to the rest of the field. Unhurried and unworried, California Chrome confidently bided his time until Espinoza asked the 7-10 favorite to accelerate with 5/16 of a mile remaining.

"When we got to the far turn, he was ready to roll. Oh, was he ready to roll,” continued Espinoza. “He just turned it on, and I knew we were home.”

With a fresh burst of speed, California Chrome seized command from Sawyer’s Hill, even while drifting wide into the stretch. With a furlong remaining he was 2 1/2 lengths clear of Lexie Lou, and no one was closing significant ground. Espinoza never had to ask California Chrome for his absolute best as the standout star flashed home clear by two lengths in a respectable 1:47.88.

“That kick at the end, that acceleration. It was just like when he won the [Kentucky] Derby,” marveled Espinioza.

Unsurprisingly, the outcome of the Hollywood Derby tilted the Horse of the Year conversation in California Chrome’s favor. When the votes were counted in January, the Kentucky Derby champion secured top honors with 143 votes, far more than the combined 89 votes earned by Main Sequence (53) and Bayern (36).

It was a well-deserved title. By the time California Chrome retired in January 2017, he’d nabbed three more Grade 1 wins, a second Horse of the Year title, and record-breaking earnings of $14,752,650, cementing his legacy as a certain Hall of Fame inductee.

As it turned out, California Chrome never ran on grass again. Once was all he needed to prove his versatility and leave a winning image in the minds of Horse of the Year voters.