Flashback: Alydar put on a show for his owners in 1978 Blue Grass 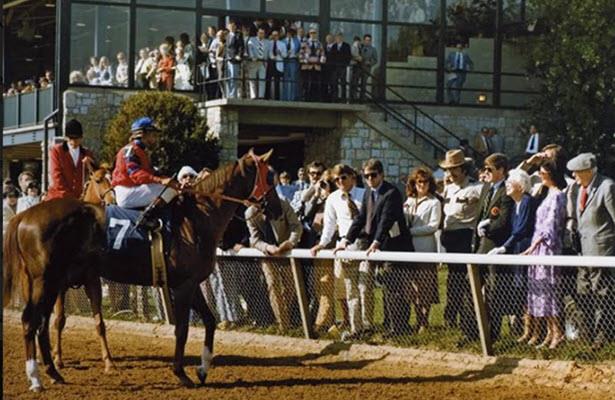 Certain moments in racing history stand out among the countless horses and humans, sprints and showdowns, routes and rallies that comprise the sport’s fabled tapestry. Unforgettable performances and achievements have left indelible marks in racing’s chronicles, and in the memories of those who witnessed them.

Epic racing performances are usually the most heralded, but once in a while, a subtler moment—unassuming and out of the regular spotlight—sneaks to the forefront, overshadowing competitions and capturing everyone’s imaginations.

Such was the case on April 27, 1978, when Alydar turned out at Keeneland to contest the Blue Grass Stakes (G1).

Fresh off decisive winter victories in the Flamingo (G1) and Florida Derby (G1), the brilliant Calumet Farm homebred was favored at 1-10 to dominate the Blue Grass, and bettors didn’t go home disappointed.

After falling as many as 11 lengths behind the leaders, Alydar unleashed a powerful burst of acceleration to sweep past his rivals and win by 13 lengths.

Alydar’s performance rightfully drew accolades, stamping the John Veitch-trained runner as the favorite to win the Kentucky Derby. Jockey Jorge Velasquez marveled at the ease of Alydar’s victory; according to writer Bill Braucher in The Cincinnati Enquirer of April 28, 1978, Velasquez’s expression “turned to round-eyed amazement” when he was told of the winning margin, finding it “incredible, so easily was it accomplished…”

Yet the most memorable aspect of Alydar’s victory wasn’t his margin of victory, or his final time, or the powerful way he trounced eight rivals. No, the moment that propelled Alydar’s Blue Grass into the annals of racing history came earlier, before the race, when the striking chestnut was parading to the starting gate.

While Alydar was making a name for himself, Calumet Farm was nearing the end of an era. Lucille Parker Wright Markey had been at the helm of the farm for nearly 30 years, following the death of her first husband Warren Wright, and had campaigned a bevy of champions and Kentucky Derby winners alongside her second husband, Admiral Gene Markey.

By the time of the Blue Grass, Lucille Markey and Admiral Markey were both in their early 80s, using wheelchairs and no longer attending the races. But with Alydar seemingly destined to carry the Calumet colors to glory in the Blue Grass, Keeneland president Ted Bassett arranged special accommodations so the Markeys could visit the track and see Alydar in action.

“We sent a Keeneland employee named Robbie McGoodwin with our Keeneland station wagon to pick the Markeys up, and Robbie chauffeured them through the iron gate that leads into the clubhouse enclosure, which was a lush green lawn adjacent to the track,” recalled Bassett in his autobiography Keeneland’s Ted Bassett: My Life, written with Bill Mooney. “There, the Markeys had easy access to the rail and would not have to walk any great distance or be impeded by the crowd…”

A record gathering of 22,912 fans turned out to attend the Blue Grass, with many more watching on ABC. As the horses paraded to the starting gate, the Markeys left the station wagon and stood along the outside rail to catch a glimpse of their rising star.

Soon enough, Alydar approached, and Velasquez guided Alydar to the rail, where the Markeys could get a closer view.

“Velasquez said to Lucille, ‘Good afternoon, madam,’ and then he said to Alydar, ‘Bow for your lady,’” remembered Bassett. “And Alydar lowered his head! I am not exaggerating… Lucille Markey put her hand out and gently touched Alydar’s nose, and the Admiral said, ‘God bless you, Jorge.’”

“It worked out exceptionally well because Alydar seemed to respond to the Markeys and he sort of bowed,” Veitch said. “Mrs. Markey had gradually lost her eyesight and could only recognize what was very close to her. That was the last time the Markeys saw a race in person and the only time they saw Alydar in a live race. Of course they watched on television but seeing him in the Blue Grass was a big thrill for them.”

Author Timothy T. Capps likewise recalled the importance of the moment in his book Affirmed and Alydar: Racing’s Greatest Rivalry. “There were few dry eyes at Keeneland, and many in attendance knew they had been part of a salute to history.”

“Calumet Farm was extremely significant to racing and Mrs. Markey was exceptionally dedicated to carrying on that tradition after her first husband died,” added Veitch. “Alydar’s Blue Grass was a big deal to Mrs. Markey. She talked about it until the day she died—both how wonderful Alydar was and how the fans really recognized who she was at Keeneland.”

There’s no doubt Alydar was a special racehorse.

Famous for his runner-up efforts behind Affirmed in all three legs of the 1978 Triple Crown, Alydar would retired with 14 wins, nine seconds, and a third from 26 starts, a decorated career that would land him in the Hall of Fame.

But arguably the greatest moment in Alydar’s career—and one of the most memorable in all of racing history—was the day he bowed for his aging owners on an unforgettable afternoon at Keeneland.