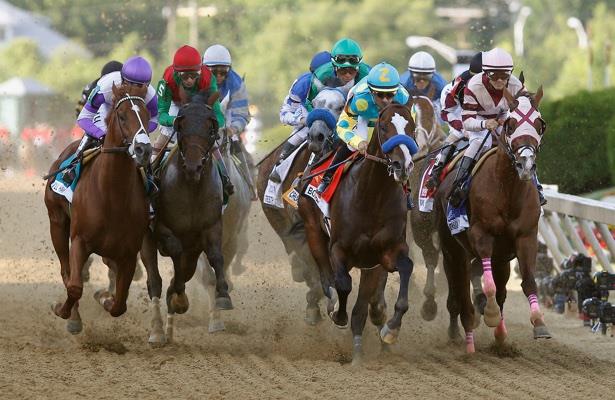 Throughout its long history, the Preakness Stakes has produced its fair share of fantastic photo finishes. If there’s a more heart-pounding sight in racing than two talented 3-year-olds battling neck-and-neck for victory in a classic, I’m not sure what it would be.

Better late than never, the postponed 2020 Preakness will be held on Saturday at Pimlico. In celebration of this exciting week, let’s look back on four of the most thrilling photo finishes in Preakness history:

Winning the Preakness was supposed to be a straightforward task for War Admiral, fresh off an easy victory in the Kentucky Derby. The Glen Riddle Farms homebred was expected to use his front-running speed to dominate seven rivals at Pimlico, prompting bettors to favor the flashy son of Man o’ War at 35-100.

The only horse considered to have any shot at beating War Admiral was Pompoon, runner-up in the Kentucky Derby and the champion 2-year-old male of 1936. On paper he seemed unlikely to turn the tables, but the rematch wound up being a lot closer than War Admiral’s backers would have preferred.

At first, War Admiral appeared to be well in control of the situation. Cruising along on a clear lead through splits of :23 1/5, :47, and 1:12 2/5, War Admiral entered the homestretch in front by 1 1/2 lengths. But then Pompoon rallied boldly up the rail to reach even terms with War Admiral, and through the final furlong the two colts furiously battled for command.

The outcome could have gone either way, and Pompoon actually had his head in front close to home. But War Admiral refused to lose, thrusting ahead to win narrowly and keep his ultimately successful Triple Crown bid alive.

An undefeated Kentucky Derby winner is always a popular betting proposition in the Preakness, with Majestic Prince serving as a prime example. Sold for a record $250,000 as a yearling, the exciting son of Raise a Native had claimed victory in his first seven starts, including a tenacious neck triumph over Arts and Letters in the Kentucky Derby.

But the popular Prince of racing wasn’t about to give up without a fight. Digging deep, Majestic Prince turned back the challenge to prevail by a neck, after which he survived a claim of foul from the rider of Arts and Letters to officially enter the history books as a Preakness champion.

1989: Sunday Silence defeats Easy Goer
in battle for the ages

Arguably the greatest Preakness ever run, the 1989 renewal saw Kentucky Derby 1-2 finishers Sunday Silence and Easy Goer lock horns in an unforgettable battle for the ages.

Their rematch at Pimlico was full of dramatic twists and turns. The early advantage went to Sunday Silence, who settled into a tracking position after Easy Goer hopped at the start and fell back to sixth place. But they didn’t retain their stations for long — heading down the backstretch, Easy Goer unleashed a powerful early bid, sweeping to the front while Sunday Silence waited in third place.

The positions shifted again on the far turn, when Sunday Silence boldly swept up alongside Easy Goer to reclaim the lead. Easy Goer — forced into tight quarters along the rail — gamely tried to battle back, and for the duration of the homestretch the two colts were never more than a head apart while leaving their overmatched pursuers five lengths behind.

It was a race neither colt deserved to lose. But by the slimmest of margins, Sunday Silence proved to be the most determined runner, flashing across the finish line in front by a nose. More than three decades later, fans still recall the 1989 Preakness as one of the greatest races ever run.

2012: I’ll Have Another catches Bodemeister

Kentucky Derby winners are normally favored to win the Preakness, but I’ll Have Another was a rare exception. Although he’d defeated Bodemeister by 1 1/2 lengths at Churchill Downs, Preakness bettors were keen to support the Derby runner-up, who’d carved out blazing fractions under the Twin Spires before weakening only slightly down the homestretch.

It seemed logical to conclude that the shorter distance of the Preakness — coupled with a presumably slower pace — would allow Bodemeister to turn the tables on I’ll Have Another at Pimlico. But such pre-race prognostications failed to account for one key factor: I’ll Have Another’s unwavering heart and determination.

The early stages of the Preakness unfolded exactly as handicappers expected. Bodemeister, favored at 17-10, secured an uncontested early lead through modest fractions of :23.79, :47.68, and 1:11.72. He kicked clear to lead by three lengths at the eighth pole, with the wide-rallying I’ll Have Another seemingly too far behind to catch up.

But down the homestretch, I’ll Have Another found another gear. Charging gamely, the Derby winner sliced Bodemeister’s advantage down to size and stuck his neck in front just as the finish line approached. Both colts ran gallantly, pulling 8 3/4 lengths clear of the rest. But it was I’ll Have Another who won the day and the glory.