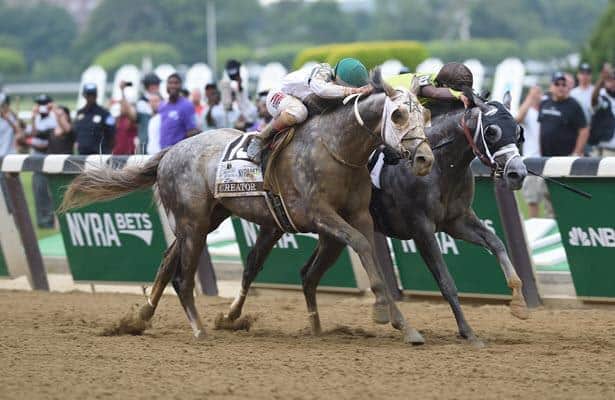 As the oldest of the three Triple Crown races, the Belmont Stakes boasts a long and rich history spanning 150 renewals. And while Secretariat’s legendary 31-length victory remains the gold standard by which Belmont winners are measured, blowout margins of victory aren’t the only mark of a memorable performance. A thrilling battle to the finish line, with two runners straining for supremacy, can be just as unforgettable.

In the history of the Belmont Stakes, four editions have been decided by a nose, with evenly matched rivals flying across the finish line inseparable except by photographs. Let’s take a trip down memory lane and recall these four fantastic finishes:

For a time, it seemed as though Granville was destined to compile one of the most frustrating Triple Crown seasons ever endured by a single horse. The improving youngster had lost his rider at the start of the Kentucky Derby, and while he rebounded with a gallant effort in the Preakness, he ultimately lost by a nostril following a furious homestretch battle.

Granville nearly experienced the same fate in the Belmont Stakes. Reserved in mid-pack early on, the Belair Stud homebred rallied into contention down the homestretch but hooked up in a duel with stubborn pacesetter Mr. Bones, who threatened to hand Granville another heartbreaking defeat.

Racing greenly, Granville briefly pondered giving the race away. Perhaps he spooked at the grandstand, or reacted badly to encouragement from his rider, but according to the Brooklyn, N.., Times Union, Granville darted sharply toward the rail and threatened to collide with Mr. Bones.

The incident cost Granville some momentum, but thereafter the son of Triple Crown champion Gallant Fox pulled a page out of his sire’s playbook and elected to race professionally. Making up for lost time, Granville re-rallied and reached the wire on even terms with Mr. Bones, and Belmont Park’s newfangled photo finish camera was necessary to declare Granville the winner by a nose.

It’s safe to say Jaipur wasn’t afraid to roll up his sleeves and engage in a dogfight with talented rivals. Best known for his epic duel with Ridan in the 1962 Travers Stakes, Jaipur showed equal resilience when recording victory by the narrowest of margins in the Belmont Stakes.

Favored off a triumph in the Jersey Derby, Jaipur spent the majority of his Belmont journey tracking Admiral’s Voyage through increasingly testing fractions of :24 1/5, :48 2/5, 1:12 1/5, and 1:36 2/5. Admiral’s Voyage was no slouch; he’d won the Wood Memorial and Louisiana Derby while placing in the Santa Anita Derby and Florida Derby during a busy Triple Crown prep season. With a furlong remaining in the Belmont, Admiral’s Voyage still led by a half a length and wasn’t giving up.

But Jaipur’s pure heart and grit was too much to withstand. Under a perfectly timed ride from legendary jockey Bill Shoermaker, Jaipur rallied tenaciously between runners down the homestretch, advancing alongside Admiral’s Voyage while fighting off an aggressive outside challenge from Crimson Satan. There was bumping, and the outcome could have gone multiple ways, but a final thrust from Jaipur managed to carry the favorite across the finish line in front by a nose.

Jaipur’s gritty performance was lauded, but so too was Shoemaker’s ride. Jim McCulley wrote in the New York Daily News: “When Shoe came riding back to the winner’s enclosure, the sweat rolling down his face as though somebody had poured a bucket of water over him, you knew he had been in a grind. A real tough grind.”


“A picture is worth a thousand words! This photo is worth five million dolllars!”

The words of track announcer Tom Durkin summed up the drama of the 1998 Belmont Stakes. With a furlong remaining, Kentucky Derby and Preakness champion Real Quiet led by four lengths and appeared destined to become the first horse since Affirmed in 1978 to sweep the Triple Crown.

But the powerful, sweeping rally Real Quiet unleashed to gain the lead on the far turn left him leg-weary down the lane. And flying from off the pace was Victory Gallop, runner-up in the Derby and Preakness, eager to turn the tables on his heralded rival.

Real Quiet, drifting out under encouragement, desperately tried to dig deep when Victory Gallop loomed up alongside. Slow-motion replays suggest that one stride before the finish line, and one stride after, Real Quiet had his nose in front. But at the precise moment the two gallant racers flashed across the finish line, Victory Gallop’s nose was in front, denying Real Quiet the Triple Crown — and a $5 million bonus — by the slimmest of margins.

Following the race, jockey Kent Desormeaux speculated he might have moved too soon aboard Real Quiet, costing the colt the race. But trainer Bob Baffert — destined to win two future Triple Crowns with American Pharoah and Justify — held a different view. “You’re ride was good,” Baffert said in a Daily News article by Bill Finley. “You ran out of horse, and that was my fault. I should have put one more work into him.”

2016: Creator weaves through the pack to catch Destin


It’s not terribly common for deep closers to win the Belmont Stakes — generally speaking, the 1 1/2-mile classic favors front-runners and speed horses. But Creator managed to defy the trends of history with a late-surging triumph in the 2016 Belmont Stakes.

Winner of the Arkansas Derby (G1) during a productive spring campaign, Creator had endured a tough trip when finishing thirteenth in the Kentucky Derby, falling too far off the pace before encountering significant traffic during the second half of his journey. But in the Belmont, the son of Tapit enjoyed a cleaner journey. A steady pace carved out by stablemate Gettysburg set the stage for Creator’s late rally, and after waiting briefly in traffic around the far turn, Creator surged through a narrow opening to wear down the pace-tracking Destin and win by a nose.

As with Bill Shoemaker and Jaipur 54 years prior, jockey Irad Ortiz received almost as much praise as Creator for his beautifully-executed ride.

"I thought Irad gave him a perfect trip. I thought he saved yards and won by inches. He made the difference," winning trainer Steve Asmussen told the New York Racing Association. "He saved a lot of ground going into the first turn. … I thought there was quite a bit of traffic around the quarter pole; Irad was beautifully patient. He went through a lot of traffic very smooth.”

Creator never won another race, but when the stakes were highest in the “Test of Champions,” the gallant gray emulated Granville, Jaipur, and Victory Gallop with a refuse-to-lose late rally.