Flashback: 3 unforgettable editions of the Travers 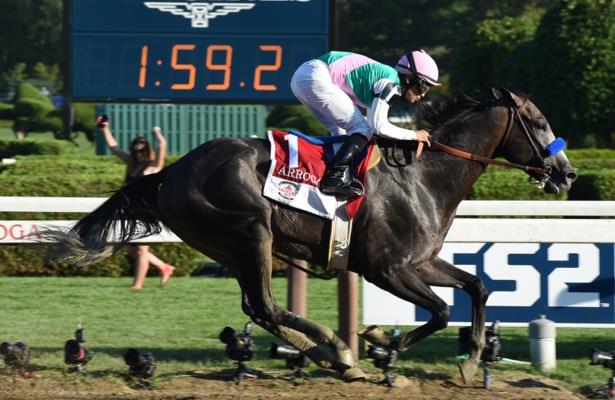 Dating back to 1864, the Travers Stakes is one of the oldest races in North America, predating even the Kentucky Derby, Preakness and Belmont Stakes. Held over 1 1/4 miles at Saratoga, the prestigious “Midsummer Derby” is an annual summer target for the best 3-year-olds in training, frequently crowning the division leader while serving as an unofficial fourth leg of the Triple Crown.

The roster of Travers winners is long and stacked with legendary names and performances. The 22-length romp by Damascus in 1967… Alydar’s victory via the disqualification of Affirmed in 1978… Holy Bull’s gallant front-running triumph in 1994 … the dead heat between Alpha and Golden Ticket in 2012 … the upset of American Pharoah by Keen Ice in 2015 …

Attempting to rank the most memorable Travers of all time is a virtually impossible task. But few will dispute that the following editions of the Travers have earned a permanent place in the lore of racing history:

The 1930 Travers was billed as a thrilling showdown between Triple Crown winner Gallant Fox and the accomplished Whichone, considered to have been the champion 2-year-old male of 1929. Although Gallant Fox had defeated Whichone in the Belmont Stakes, Whichone came back to win a trio of stakes races at Saratoga in fast times. Their rematch in the Travers figured to rank among the highlights of the summer.

Four horses turned out to contest the Travers, but bettors viewed the race as a two-horse battle, favoring Gallant Fox at 1-2 to defeat Whichone at 8-5. Hardly any supporters could be found for Jim Dandy, an unheralded 100-1 shot who had lost 14 consecutive races leading up to the Travers. But Jim Dandy had a secret. Not the soundest of runners, he was most comfortable racing over muddy tracks, which provided a better cushion for his feet. As a 2-year-old he had splashed his way through a muddy track to upset the Grand Union Hotel Stakes at Saratoga, demonstrating an affinity for the famous Saratoga Springs oval. So when a rain-soaked “heavy” track arose for the Travers, Jim Dandy was ready to roll. He was further aided by a destructive pace duel between Gallant Fox and Whichone, involving deceptively testing fractions of :25, :49 2/5, and 1:13 3/5 over the slow going. In an effort to race over what was perceived as the best part of the track, jockey Sonny Workman allowed Whichone to race wide throughout, carrying Gallant Fox even wider in an all-out effort to beat the favorite.

The duel between Whichone and Gallant Fox was so intense — so focused — that no one paid any attention to the ground-saving Jim Dandy until he came surging into contention on the far turn. By the time the field reached the homestretch, Jim Dandy had rolled past the tiring leaders, and from there he pulled clear powerfully to win by eight lengths. Nine decades later, Jim Dandy’s shocking triumphs remains one of the greatest upsets in racing history, and the mud-loving colt is honored at Saratoga each year with the running of the Jim Dandy (G2), an important prep for the Travers. Jaipur (1962) The footnotes of historical Daily Racing Form result charts are usually straightforward in nature, describing how races unfolded without engaging in unnecessarily poetic or opinionated prose. But special moments call for special exceptions, and following the 1962 Travers, the Daily Racing Form chartcaller felt compelled to pull out vivid adjectives to describe the epic race fans had just witnessed: “Jaipur raced on even terms with Ridan from the break and they continued as a team in a torrid duel. Jaipur, on the outside of Ridan, had a slight lead at the quarter pole and won narrowly in a race in which neither horse gave way. Ridan, showing brilliant speed, was unable to shake off Jaipur while saving ground throughout. He raced courageously to the end and was beaten narrowly in a thrilling duel.” The passing of time has done little to dull the glory of the 1962 Travers, which is still considered one of the greatest races ever run. Jaipur, narrow winner of the Belmont Stakes, was favored to beat reigning champion 2-year-old and Preakness runner-up Ridan in a showdown of the best 3-year-olds in training.

From the moment the starting gates opened, no more than a few feet separated the two gallant rivals. Ridan, breaking from the rail, came out quickest. Jaipur, starting from post two, matched his every move and was never more than half a length behind as Riden carved out steady and increasingly testing splits of :23 4/5, :47 2/5, and 1:11. Through the final half-mile, Jaipur needed every ounce of his speed and stamina to secure the lead, turn back a final stubborn challenge from Ridan, and win by a nose in 2:01 3/5, equaling the track record. There have been more accomplished horses to contest the Travers — Triple Crown winners, Horses of the Year, Hall of Fame inductees. But none have ever put on a better show than Jaipur and Ridan. Arrogate (2016) For nearly 40 years, the time of 2:00 flat stood as an unbeatable standard for racing 1 1/4 miles at Saratoga. The talented General Assembly splashed his way through a sloppy track to establish the seemingly untouchable mark in the 1979 Travers, and during the ensuing decades it became fair to wonder if any horse would ever break the elusive two-minute mark at Saratoga. Then along came a freakish gray colt named Arrogate, and the record books were promptly rewritten. When Arrogate arrived at Saratoga for the 2016 Travers, he was a largely unheralded allowance winner stepping up sharply in class for his stakes debut. His dozen rivals were formidable: Preakness (G1) winner Exaggerator and Belmont (G1) champion Creator, for starters, plus Belmont runner-up Destin and future Horse of the Year Gun Runner. So deep was the field that bettors disregarded Arrogate as the eighth betting choice at odds of 11-1. But Arrogate turned the pre-race script upside down with a tour-de-force performance. Guided by Hall of Fame jockey Mike Smith, Arrogate sprinted to the front from post one and carved out testing splits of :23.23, :46.84, and 1:10.85 while pursued by stablemate American Freedom. Rounding the far turn, Arrogate began to widen his advantage, and he entered the Saratoga homestretch in command of a two-length lead.

That’s when Arrogate turned on the afterburners.

Accelerating like he was just getting started, Arrogate blasted away from his pursuers, sprinting the final quarter-mile in :23.84 to pull away and dominate by 13 1/2 lengths. When he flashed across the finish line, the timer revealed the seemingly impossible — Arrogate had stopped the clock in 1:59.36, absolutely shattering the track record.

Arrogate proved his Travers triumph was no fluke by rattling off victories in the Breeders’ Cup Classic (G1), Pegasus World Cup (G1), and Dubai World Cup (G1) to become the highest-earning racehorse in North American history. His epic last-to-first triumph in Dubai is widely considered his greatest performance, but it was Arrogate’s record-breaking romp at Saratoga that first put the great gray on the map