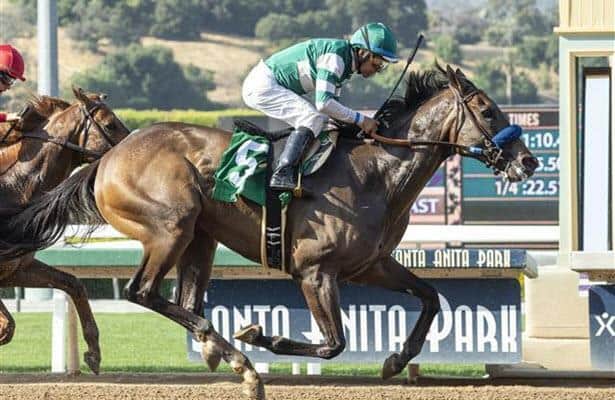 A game nose winner of the seven furlong Damascus Stakes Nov. 2, Flagstaff, a lightly raced son of champion sprinter Speightstown, will be making his second start in graded stakes competition on Saturday.

Idle since March 30, Bob Baffert’s veteran 5-year-old Ax Man has trained well for his return while Baffert’s Speed Pass, a 4-year-old Bodemeister gelding who is unbeaten in two starts, gets a major test for class off of a galloping seven-length allowance score at Los Alamitos on Dec. 7.

A game nose winner of the seven-furlong Damascus Stakes, Flagstaff has won four out of his nine starts and been in the money on eight occasions. Off as the even money favorite in the Damascus, he ran a big third at 9-1 two starts back in the Santa Anita Sprint Championship (G1), a race in which he was beaten 2 ½ lengths by top gun Omaha Beach.

A winner of the 2017 Palos Verdes, Florida-bred St. Joe Bay could be in need of a race off the lengthy layoff, but his 14: 4-5-2 record over the Santa Anita main track is well worth noting. Based at Los Alamitos for his return to afternoon action, St. Joe Bay will be ridden for the first time by Rafael Bejarano. The leading money earner in the Palos Verdes field with $734,515, his overall mark stands at 36: 7-7-6.

Considered a Derby prospect two years ago, this 5-year-old gelding by Misremembered won the restricted Sir Barton Stakes going 1 1/16 miles at Pimlico in his fourth career start on May 19, 2018, but is still looking for his first graded stakes win in what will be his 10th career start. Idle since well beaten here as the 6-5 favorite going seven furlongs in the San Carlos Stakes, Ax Man brings an outstanding work tab and a full serving of class to Saturday’s Palos Verdes.

A first-out maiden winner going six furlongs at Los Alamitos Sept. 20, Speed Pass relished a main track listed as “good” on Dec. 7 at Los Al, responding with a scintillating seven length allowance score at the same distance as the 6-5 favorite. Out of the Curlin mare Julie Napp, Speed Pass could be sitting on a big 4-year-old campaign as he faces much tougher horses in the Palos Verdes.