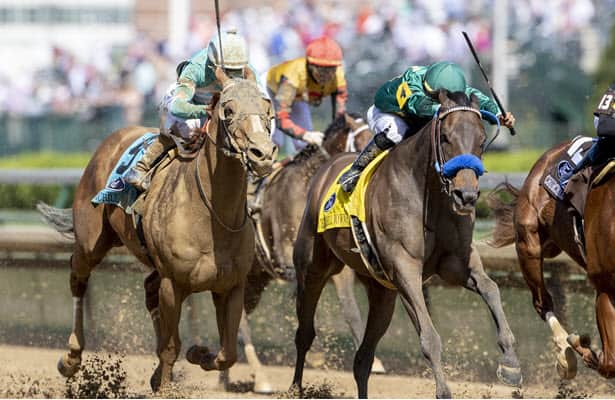 A deep, wide-open version of the Grade 1, $500,000 Churchill Downs Stakes lived up to its billing Saturday, and Flagstaff got the best of it.

The 7-year-old Flagstaff crossed inches ahead of long shot Lexitonian to earn his first Grade 1 win in the seven-furlong sprint. Flagstaff and second-through-fourth-place finishers Lexitonian, Whitmore and Hog Creek Hustle all hit the wire within a length of each other.

“You could’ve seen two or three different winners in the last jumps of that race,” trainer John Sadler said. “He got the nod today, so we’re thrilled.”

Flagstaff covered seven furlongs under jockey Luis Saez in 1:21.82, returning $11.80 at 9-2 odds. The Speightstown gelding entered off a Keeneland win in the Commonwealth Stakes (G3) and has not finished worse than fourth in any of his last 15 starts.

“He’s won everywhere he’s gone and always run a good race,” Sadler said. “Big credit to the ownership, Lane’s End Farm and Mr. Hronis and his family. They’ve been patient with him and it’s fun to see him rewarded.”

Get the Prize went out to the front of the 12-horse field, covering the first quarter-mile in 21.97 seconds. Fellow long shot Bango had his nose in front through a half in 44.21 seconds.

2020 Eclipse Award champion male sprinter Whitmore closed steadily on the outside, and Lexitonian made his bid two-wide off the rail. But it was Flagstaff who squeezed between them and got up in time.

“Getting settled off the pace was the key,” Saez said. “They were going pretty fast up front. I tried to save ground into the turn and when there was a moment to go out, so I had that good spot he came for me.

“I know Whitmore is a good horse, but my horse really dug in. When I saw everybody coming past me, I thought it was over, but he never gave up and finally he gave me the last little bit and we got there.”

Lexitonian came close to scoring a Grade 1 win for the second time in his career. The 5-year-old son of Speightstown was a nose short of winning the Bing Crosby Stakes (G1) last August at Del Mar.

“He’s a hard-trying horse,” Lexitonian jockey Tyler Gaffalione said. "He’s got a lot of natural speed and I just let him run his race. He fought hard to the wire. He gave me a good feeling at the eighth pole, but we just didn’t have enough today.”

Tap It to Win, the race’s 3-1 post-time favorite, missed the board.