Fixed odds: Are they really all they are cracked up to be? 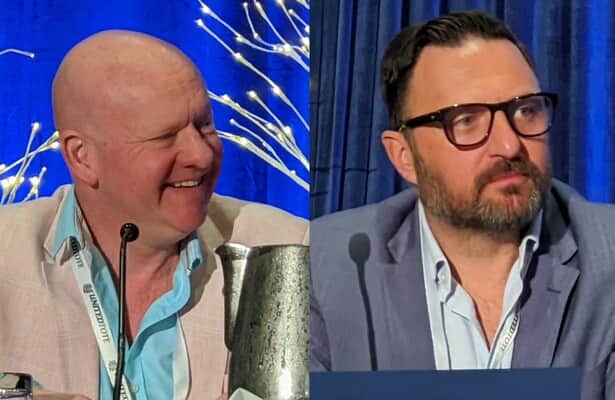 The first hour of a panel discussion on the coming of fixed-odds wagering to American horse racing was rather dry Wednesday morning.

That all changed with one question to two transplanted international experts. Their debate provided a most lively exchange to the 47th Global Symposium on Racing.

The flashpoint question was whether fixed-odds markets would cannibalize traditional pari-mutuel pools when they are paired, side by side, for the same races.

“We’re pretty confident there will be no cannibalization,” said Dallas Baker, an Australia native who is head of international operations for BetMakers. That is the Australian company that has a 10-year contract to be the conduit for fixed-odds wagering at Monmouth Park and the Meadowlands in New Jersey.

“One, we’re opening up to that whole sports-betting marketplace, which is a whole new audience that is going to come in,” Baker said. “And the (fixed-odds) bookmakers will be using (pari-mutuels) as a tool to lay off (liability), which enables them to take bigger bets. That’s where both of them working together is so important. One feeds off the other.”

Simon Fraser, who cut his professional teeth in London before becoming senior vice president with 1/ST Technology, begged to differ with Baker. As they passionately exchanged opinions, they fell back on Commonwealth vernacular, such as “totes” and “pools” for pari-mutuels, “books” and “bookmakers” for fixed odds and “punters” for bettors.

“Everywhere in the world where totes and fixed odds have worked and been available to punters, there has been cannibalization,” Fraser said. “Why don’t you think that’s not going to happen in the U.S. when it’s happened in Australia, in South Africa? It’s happened everywhere. Everybody who sits in this room and thinks there’s going to be no cannibalization, we’re fooling ourselves.”

Fraser pointed to the very allure of fixed odds, namely the chance for bettors to lock in odds without worrying about fluctuations before post time.

“It’s much easier to get someone who already bets on racing on totes to bet on fixed odds than it is to get somebody who bets on table tennis and try and convert them to a racing punter, which is hard,” Fraser said. “Somebody who already bets on racing, they’ve already made a choice about who they’re going to bet on. To get them to move their bet from the totes to the fixed odds, if you offer them a nice bonus and a decent price, it’s a lot easier.”

Baker accepted the point that fixed odds cut into pari-mutuel pools, but he said that is not as important as the total handle when both formats are available to horseplayers and, by extension, to the racing industry. He is confident that the grand total will rise dramatically.

How all that money is divided is a concern for stakeholders such as horsemen, whose way of life depends in large measure on betting dollars.

“My first point has been obviously making sure, at this stage, horsemen are cautious,” Eric Hamelback, CEO of the National Horsemen’s Benevolent and Protective Association, said early in Wednesday’s discussion. “Don’t rush into a contract negotiation and sign something too quickly.”

Quickly is certainly not a word to describe the rollout of fixed odds in New Jersey, where Gov. Phil Murphy signed a first-in-the-nation law to legalize the format for horse racing. That was more than four months ago.

One reason for the holdup has been a debate over whether fixed odds for horses should be considered racing bets or sports bets. The tax on a track or betting platform to accept a pari-mutuel racing wager in New Jersey is lower than it is for a casino or bookmaker to accept a comparable bet on a sports event.

“The fixed-odds wager is and should be under the umbrella of the Interstate Horseracing Act,” Hamelback said. “It doesn’t say pari-mutuel. It doesn’t say fixed odds.”

Hamelback said owners and trainers have to be protected by regulations that would guarantee them their fair share of the new money.

“A revenue-sharing model of some formula has to be negotiated,” he said. “Our goal is to include all wagering in promoting and establishing additional wagering on horse racing. We also don’t want to see any cannibalization of the existing pari-mutuel pools.”

The New Jersey Division of Gaming Enforcement published regulations last month governing the placement of fixed-odds wagers but nothing yet outlining a revenue split.