Five Breeders' Cup races we are most looking forward to 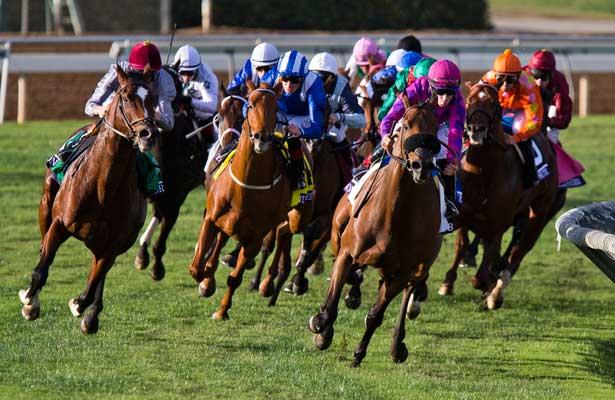 All 14 Breeders' Cup races carry their own intrigue and storylines. But as with any premiere event, some parts of it are more exciting than others. This year's Classic is filled with depth, class and star power. It is a wide-open betting race and has everything one could want in a premiere race.

The Classic is not the only race worth watching closely this year, however. Our team weighed in on which other Breeders' Cup races they are most looking forward to viewing and betting.

This year’s edition of the Juvenile Fillies is coming up very strong. You don’t see two horses scoring out at 100 very often, but that’s what we have here with Vequist and Simply Ravishing. Key in this race is to favor fillies with strong efforts going two turns and/or knocking out 95+ BRIS Pace/Speed Rating figures throughout their final prep.

That kind of balance will usually win this race. Looking for a long shot? This was always known as a chalky race but over the last seven editions four of those races were won by a 20-1+ long shot. Historically, you can count on a long shot closer to finish third or fourth.

Crazy Beautiful looks like the play this year. Also note, no trainer has hit the board more often in this race over the past few years than Ken McPeek, who has both Simply Ravishing and Crazy Beautiful in this race. A strong hand, indeed.

I am looking forward to the Breeders' Cup Filly and Mare Turf. Magical, Tarnawa and Cayenne Pepper are three of the top turf horses in the world, and there is a possibility that they all ship to Keeneland to take on the always consistent Rushing Fall.

Even if Magical opts for the Turf, this race has the star power and depth to be ultra competitive. It also will provide fantastic wagering opportunities.

Cayenne Pepper, the least touted of the top three Euros, could find herself at 8-1 or higher, even though she is in the form of her life.

A horse like Mean Mary, who thrives at longer distances and gave Rushing Fall all she could handle last time, will be at double-digit odds in this spot.

Cayenne Pepper and Mean Mary could easily make up two-thirds of the trifecta.

You can talk about five horses in this race without even getting to seven-time Grade 1 winner and 2018 champ Sistercharlie or Woodbine Mile hero Starship Jubilee.

This race could be run six times with a different winner every time. It might come down to the race flow and could be determined by who gets the best ride.

On paper, the Breeders’ Cup Sprint is easily in the Top 3 of anticipated Breeders’ Cup races. One reason is because of a lightly raced 3-year-old with huge talent. The Steve Asmussen-trained Nashville set the racing world on fire with a local Oct. 10 allowance race. In only his second career start, Nashville set the pace by a good margin and went on to blast away, eventually opening up to win by 9 3/4 lengths. For the romp, TimeformUS gave Nashville a massive 130.

Given the impressive effort in his second start, this might end up as the only race of his career where he starts at 8/5 or higher. In the Breeders’ Cup, bettors find value in the best horses.

If Nashville does not start, though, the Sprint is still a great race thanks to two probable starters.

Nashville’s stablemate Yaupon might go to the front and pull off moderate enough fractions to hold on. Yaupon does not figure to demolish the field in the same way Nashville can, but he is still a horse with a future. Vekoma also figures to attract attention as he returns off the layoff and cuts back to six furlongs after his one-mile Metropolitan Handicap (G1) victory in June.

In other words, bettors can go different ways in the Sprint and find value. From a pure racing standpoint, it is also exciting to watch a blazing six-furlong dirt sprint with Grade 1 horses.

One of the races I’m most looking forward to seeing and betting is the Filly & Mare Sprint. What’s so exciting here is a mix of star power, up-and-comers, knowns and unknowns, favorites to stand with and against.  But clearly this race goes through the rocket Serengeti Empress, and the betting goes through superstar Gamine.

What’s so great about Serengeti Empress is she delivers what you can expect every time. In her last two, both Grade 1s at seven furlongs, she zipped a half in 43 3/5 seconds, winning the Ballerina at Saratoga and falling short by a nose in the Derby City Distaff at Churchill. That speed is going to be a real problem for Gamine, who has made her reputation running alone on the lead in soft paces. This will be exactly the opposite: blazing pace and coming from behind.

As they say in racing, "don’t take a short price on a horse doing something new for the first time." Tossing Gamine opens all kinds of payoff potential. I’m also looking forward to betting against Venetian Harbor, who had the advantage of slow paces in her last two.

As for Serengeti Empress, how long she will hold on is anyone’s guess, but she’s never been out of the exacta at this distance.

If the pace starts to melt down, there’s an interesting mix of older sprinters (Bell’s the One, Bellafina, Come Dancing, Inthemidstofbiz and Sally’s Curlin), 3-year-old filly sprinters (Frank’s Rockette, Sconsin and Wicked Whisper) and the 3-year-old filly Speech, who was dominant in the Ashland at Keeneland two starts back but disappointed in the Kentucky Oaks.

The Breeders' Cup race that piques my interest the most is the Dirt Mile. It figures to be a mad scramble early as multiple horses and riders vie for vital early position, while others try not to lose too much ground from disadvantageous outer post positions. It might be wise to look for an athletic horse with early-pressing versatility.

Art Collector is an intriguing contender as he cuts back in distance, and it would be a great story if he could get the job done for crafty, low-profile conditioner Thomas Drury Jr. The talented son of Bernardini just missed the show while well behind the top two finishes in a disappointing effort as the second betting choice in the Preakness Stakes last time. Prior to that effort, he missed some training and was forced to skip the Kentucky Derby. He won the Blue Grass Stakes at Keeneland earlier this year and fired a bullet workout at Churchill Downs Oct. 22.

Other classy runners targeting the Dirt Mile include Complexity, a one-turn mile specialist at Belmont Park for Chad Brown, and surface-switching multiple grade one winner War of Will. Met Mile hero Vekoma could go in this race or the Sprint, and this would be his first start since the Fourth of July.