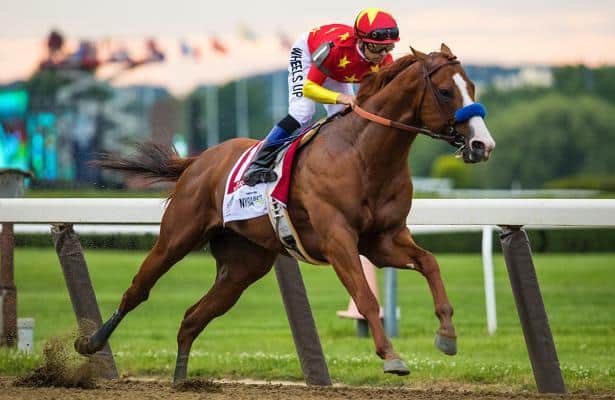 Breeders have announced mares to have checked in foal to 2018 Triple Crown winner Justify, who began his stallion career this season at Coolmore' Ashford Stud in Versailles, Ky.

Stonehaven Steadings, also located in Versailles, announced Monday the 10-year-old Bernardini mare Venetian Sonata is in foal to Justify. Venetian Sonata, out of Moonlight Sonata, by Carson City, is a full sister to Grade 2 winner Wilburn, who stands in Oklahoma, and stakes winner La Appassionata.

Jet Black LLC in Cordova, Md., announced March 7 the 5-year-old mare Joe'sgoldenholiday, bred to Justify on Feb. 20, is in foal. The daughter of Harlan's Holiday is out of the Banker's mare, Golden Works, making her a half-sister to Goldencents.

Big morning for us! Costa Del Sol was covered on first jump to #Justify at 7:32am and both Joe’sgoldenholiday (dark bay) and One Last Cast (bay) were confirmed in foal this morning on their 2/20 covers to Justify and #JimmyCreed. #HorseRacing #JETBLACK pic.twitter.com/f6NPbQZugo

Justify was undefeated in six career starts that spanned 112 days. He was campaigned by WinStar Farm, China Horse Club, Starlight Racing and Head of Plains Partners and retired with nearly $3.8 million in earnings.

The chestnut colt went to WinStar Farm in Versailles upon retirement as Coolmore negotiated his breeding rights. Justify is a son of the late Scat Daddy, who also stood at Ashford.

Division Rankings: Little suspense left in Eclipse races
With a little over three weeks left in the 2022 ra...
x