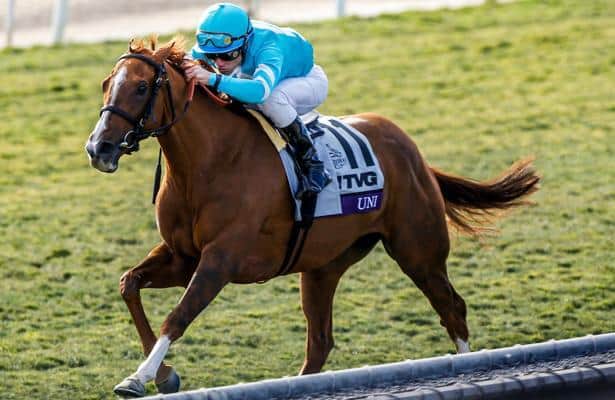 Belmont Park follows up a big weekend of racing with another one, as four graded stakes races are on tap for Saturday.

Here’s a look at the prospective fields provided by the New York Racing Association before entries are taken Wednesday for the Saturday races and Thursday for the Sunday race.

Trainer Chad Brown has plenty of momentum with five probables listed for this one-mile turf race for older fillies and mares, but the most exciting one will be the potential return of multiple stakes winner Uni, last seen scoring in the Breeders’ Cup Mile in November.  Speaking of the 2019 Breeders' Cup Mile, Uni and runner-up Got Stormy could get a rematch here.

Got Stormy followed up her second-place finish in the Breeders’ Cup Mile with a win in the Matriarch Stakes (G3) in December but hasn’t won in three tries this year.

Brown also has three of his four superfecta finishers from the June 6 Intercontinental (G3) at Belmont listed as probables: winner Newspaperofrecord, Regal Glory, who finished second, and Significant Form, who finished third. His fifth probable is Rushing Fall, winner of the 1 1/16-mile Beaugay Stakes at Belmont on June 3. Brown has won this race four years in a row, including last year with Rushing Fall.

Another probable is Beau Recall, trained by Brad Cox and last seen finishing ninth in the Old Forester Mint Julep Stakes (G3) at Churchill Downs in her only start this year. Christophe Clement has Feel Glorious who could make her 2020 debut, and Brendan Walsh has Zofelle, who hasn’t won in three tries this year. Valedictorian, trained by Kelly Breen, is listed as possible for the Just a Game.

Mean Mary will go for her fourth straight win in this 1 1/4-mile turf race for older fillies and mares. Trained by Graham Motion, she won the La Prevoyante Stakes (G3) in January and the Orchid Stakes in March last out, both at Gulfstream.

Valiance, trained by Todd Pletcher, is expected to attempt a rebound from her fourth-place finish in the Powder Break Stakes last month at Gulfstream. It was her only loss and followed three straight wins.

Brown has two probables – Fools Gold and My Sister Nat – for this 1 1/4-mile turf route for older fillies and mares. It would be the first start of the year for both, with Fools Gold losing two straight after winning the Fasig-Tipton Waya Stakes (G3) in August at Saratoga and My Sister Nat winless in four U.S. tries last year after shipping from France.

Clement has Call Me Love, second best in the Beaugay in her first U.S. start after shipping from Italy. Kelsey’s Cross, coming off a victory in the Ginger Punch Stakes at Gulfstream on June 6, is Attfield, is listed as probable.

John Servis has Diamond King cutting back in distance in this 6 ½-furlong sprint for older horses. Last out in May saw the 5-year old finish seventh in the one-mile Blame Stakes at Churchill Downs, which was preceded by a win at the same distance in Aqueduct’s Stymie Stakes in March.

Diamond Oops, trained by Patrick Biancone, finished second in his last effort, a one-mile handicap at Gulfstream on June 13. His last win was in the Mr. Prospector Stakes (G3) in December.

Stan the Man, trained by John Terranova, hasn’t raced since March, and his last score was in the Queens County Stakes at Aqueduct in December. T Loves a Fight, trained by Orlando Noda, has been on the board in six of his last seven starts but hasn’t won since an allowance race at Belmont in October. And Yorkton, trained by Motion, has second-place finishes his last two outs – the Sir Shackleton Stakes in March and an allowance optional claiming race in April.

Midnight Charly, trained by Edward Coletti Jr., and Promises Fulfilled, trained by Dale Romans, are slated to make their first starts of the year in this race.

This is a 6 1/2-furlong sprint for fillies and mares 3 years old and up.

A Bit of Both, formerly trained by Jason Servis but now under the eye of Cox, is expected to make her first start since a sixth-place finish in the Inside Information Stakes (G2) at Gulfstream in January. She has seven wins in 11 starts, but no graded-stakes victories.

Bob Baffert’s Mother Mother also has no graded-stakes scores, but she’s been on the board in her last five starts, including a second-place effort in the Santa Monica Stakes (G2) in February and a third-place finish in the Desert Stormer Stakes (G3) in May.

Come Dancing, trained by Carlos Martin, won or placed in six straight graded-stakes starts before finishing sixth in the Breeders’ Cup Filly and Mare Sprint in November. Last out, she was 12th in the Apple Blossom Handicap (G1) in April.

Other probables: Chalon, trained by Arnaud Delacour, hasn’t started this year, with her last out a fourth-place effort in the Thoroughbred Club of America Stakes (G2) at Keeneland in October. Pacific Gale, trained by John Kimmel, hasn’t scored since October 2018 and has only three wins in 21 career starts. Brown’s Royal Charlotte finished second in the Harmony Lodge Stakes on June 5 in her only start this year. And Victim of Love, trained by Todd Beattie, finished second in the Runhappy Barbara Fritchie Stakes (G3) in February before coming in fifth in her last out in the Nellie Morse Stakes.