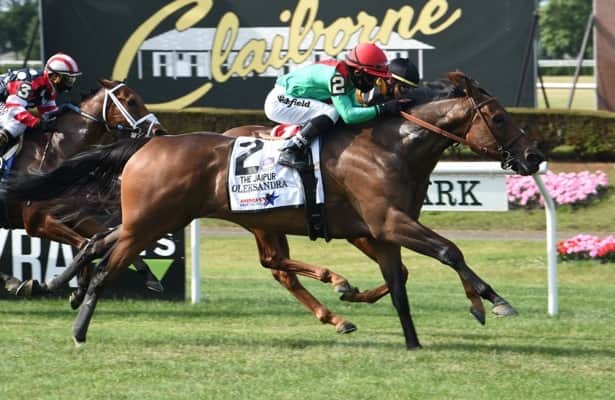 Oleksandra looks to bounce back here after a ninth-place finish in the Breeders’ Cup Turf Sprint, which was her first start since a 20-week layoff. She had finished in the money in eight straight races, dating to May 2019. Last out before the Breeders’ Cup, she won the Jaipur Stakes (G1) at Belmont in June.

Richard Mandella’s Jolie Olimpica is expected to defend her win here last year, which was her first U.S. race. Since then, she has won the Monrovia Stakes (G2) and finished second in the Buena Vista (G2) and the Jenny Wiley (G1) last out. Also probable for Mandella is Superstition, who graduated on her fourth try on Nov. 14 and came back two weeks later to win an allowance optional claiming race at Del Mar.

Each of the probables in this race ran in either the Zenyatta (G2) or the Bayakoa (G3) in their last start. John Shirreffs is expected to enter Hard Not to Love, who finished second in the Zenyatta, and Bob Baffert is expected to bring Fighting Mad, who came in third. The top four finishers from the Bayakoa also are expected: Proud Emma, Message, Stellar Sound and Miss Stormy Deed.

Ride a Comet is expected here after his score in the Kennedy Road Stakes (G2) last out. He has won seven of his last nine starts for trainer Mark Casse. Admission Office could make his first start in nearly seven weeks, last scoring in the Louisville (G3) for Brian Lynch. And Doctor Mounty would make his 38th career start here, after last finishing fifth in the Red Smith (G3) for Shug McGaughey.

Chad Brown is expected to enter one or two here, according to the Gulfstream racing office. He nominated Analyze It and Emaraaty.