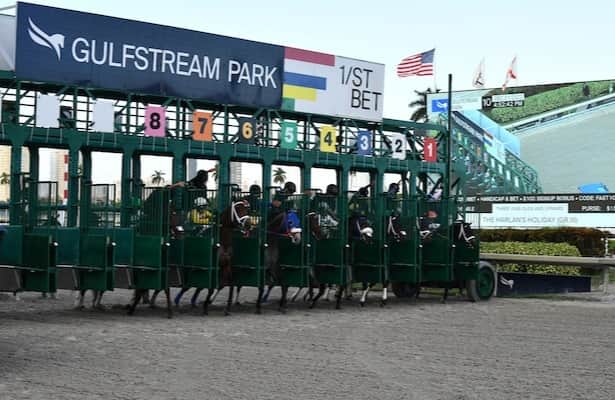 The Pegasus World Cup stakes at Gulfstream on Saturday are in the spotlight, but the weekend also brings the Southwest (G3), a Kentucky Derby points prep with three Brad Cox starters, and two points preps for the Kentucky Oaks (G1).

Here's an early look at the likely fields.

The early favorite, at 5-2, is Cyberknife, who will have his last start before being retired to stud. He’ll start from post 10 in the 12-horse field. Proxy, the second choice at 9-2, drew the inside post. Saffie Joseph Jr. has three entries, including White Abarrio, 4-for-4 at Gulfstream but winless at other tracks, and Skippylongstocking, winner of the Harlan’s Holiday (G3) last out. Click here for more about the field.

The morning-line favorite here is Ivar, who was fourth last out in the Breeders’ Cup Mile and runner-up in two Grade 1s before that. City Man is the second choice, at 4-1, and drew the outside post. Lady Speightspeare, at 6-1, is the only female in the race. Todd Pletcher, unable to start two-time winner Colonel Liam because of injury, has Wit starting along the rail at 8-1 on the morning line. Click here for more.

Shantisara is the morning-line favorite, at 2-1. Her only start since April was a fifth-place finish in a black-type stakes at Keeneland on the Breeders’ Cup Saturday undercard. The second choice is Dalika, at 7-2. The 7-year-old was 3-for-6 last year, with all of her wins in graded stakes. Queen Goddess, at 5-1, won the Robert B. Frankel (G3) on New Year’s Eve in her first start since May.

Brad Cox is expected to have three last-out winners here. Jace’s Road won the Gun Runner at Fair Grounds by 5 1/2 lengths. Corona Bolt is 2-for-2 and won the Sugar Bowl by 6 3/4 lengths. Hit Show would make his first stakes start after winning a Dec. 26 optional-claiming allowance where Protege finished third.

Faiza is 2-for-2 with a win by a head in the Starlet (G1) last out ahead of Pride of the Nile and Uncontrollable, also expected here. Ice Dancing was a 3 1/4-length winner last out in the Santa Ynez (G3), with Fast and Shiny, also expected here, finishing third. Justique is 2-for-3 after bouncing back from a third-place finish in the Chandelier to win a black-type stakes at Del Mar.

Inside Information (G2), Gulfstream, 7 furlongs, fillies and mares, 4-year-olds and up

Obligatory had a 2022 record of 5: 2-1-1, with both wins in graded stakes, and was third in the Breeders' Cup Filly and Mare Sprint last out. Maryquitecontrary has won four straight and is coming off a win in the Rampart Stakes at Gulfstream, where she beat Colorful Mischief, also expected here, by 3 1/2 lengths.

Prevalence returned from a five-month layoff to finish fourth in a Keeneland allowance in October and then seventh in the Mr. Prospector (G3). Hoist the Gold, who is 0-for-9 since winning an optional-claiming allowance in February, is cross-entered here and in the Pegasus World Cup.

Channel Maker was 2-for-6 last year and was seventh in the Breeders' Cup Turf last out. Abaan has gone 0-for-5 since winning this event last year. Value Engineering beat Wicked Fast last out in the H. Allen Jerkens at Gulfstream.

Adventuring had her 2022 debut in August and won two stakes before finishing fourth in the E.P. Taylor (G1) and third in the Cardinal (G3). Transient made her first stakes start last out in the Maple Leaf (G3), where she was caught in the stretch and finished third.

Little Vic has a score to settle with Drafted after being caught at the wire last out in the Gravesend to lose by a nose. Synthesis finished in the money in seven of his nine starts last year and is coming off an optional-claiming allowance win at this track and distance.

Bob Baffert had eight of the 11 nominations for this event, and all are listed as probable. They include Havnameltdown, winner of the Bob Hope (G1) last out, and four who are coming off maiden wins. Two nominees are from Ryan Hanson, and they are listed as possible. The other nomination was Navy Man, who ran in a Sunday race at Santa Anita.