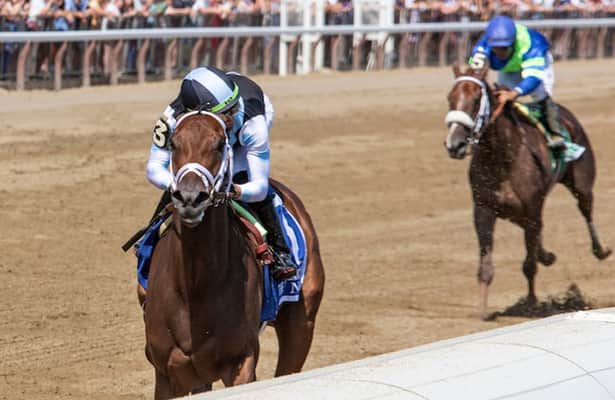 A rubber match between Nest and Secret Oath in the Grade 1 Alabama at Saratoga looks to be the highlight of the weekend stakes calendar. Del Mar, Monmouth Park and Century Mile in Canada also have graded stakes on the calendar, and the Canadian Triple Crown kicks off with the Queen's Plate at Woodbine.

Here’s a look at the likely fields for the weekend’s graded stakes and for the Queen’s Plate, which is restricted to Canada-breds.

This is expected to feature the third matchup between Grade 1 winners Nest and Secret Oath. In the 1 1/8-mile Kentucky Oaks in May, Secret Oath beat runner-up Nest by two lengths. Then on July 24 in the Coaching Club American Oaks (G1) at Saratoga, also contested at 1 1/8 miles, Nest blew away the field by 12 1/4 lengths. Secret Oath was second. Gerrymander took a major step forward for top trainer Chad Brown last out when winning the Mother Goose (G1) at Belmont Park by three lengths.

Eminent Victor and Koala Princess exit a two-three finish behind Dolce Zel in the July 22 Lake George (G3) going a mile at Saratoga on July 22. Eminent Victor was the 5-2 favorite for Brown. Canisy has two wins and a second in three starts for Christophe Clement, including a front-running allowance win at Saratoga going 1 1/8 miles. Sparkle Blue won the Christiana Stakes at Delaware Park most recently when making her first start in more than seven months.

Mind Control hasn’t raced farther than a mile since 2018, but he’s coming off a win over Hot Rod Charlie in the Salvatore Mile (G3). He’s one of five nominations here by Todd Pletcher. Chad Brown nominated four, and stakes coordinator Dove Ward expects Highly Motivated and/or Pipeline, who finished 1-2 in the Monmouth Cup (G3). Tax returned from a 1 1/2-year absence to win the black-type Battery Park Stakes at Delaware Park last out.

Spendarella started the year 2-for-2 before finishing second in the Group 1 Coronation Stakes at Ascot last out in June. Bellabel has raced twice this year, her first starts in the U.S. – she won the Blue Norther at Santa Anita in January and the San Clemente (G2) on July 23. Cairo Memories returns to California after her fifth-place finish in the Belmont Oaks (G1). Island of Love won the Señorita (G3) in May before finishing second in the Honeymoon (G3) and third in the San Clemente.

Robertino Diodoro – winner of three Canadian Derbies – said he will enter Red Knobs, a last-out winner in the Manitoba Derby, and Great Escape, looking for his first win this year. Soaringforthesun and Gunfighter would step up here after finishing 1-2 in the BC Cup Sir Winston Churchill Derby Trial last out at Hastings.

Mark Casse, who has won Canada’s most prestigious race twice, confirmed that he plans to enter the 1-2 finishers from the Plate Trial, Sir For Sure and Hall of Dreams. Rondure has two wins and a second from three starts this year and most recently won the Marine (G3) at Woodbine by 5 1/4 lengths, with Ironstone, also expected here, missing second by a neck. Moira is 2-for-2 this year and 4: 3-1-0 lifetime.

Probables were not available for the King Edward (G2) or the Canadian Stakes (G2) at Woodbine on Sunday.