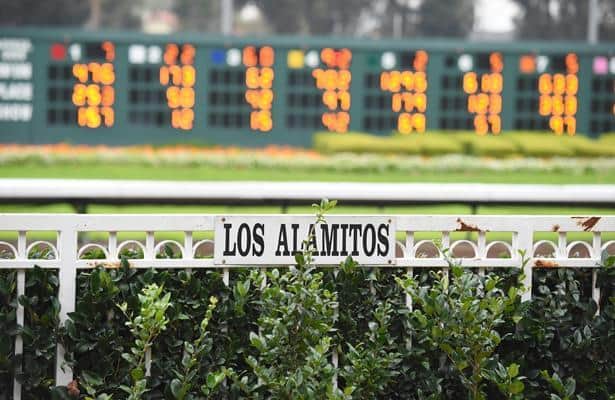 This weekend's Mr. Prospector (G3) will be run without Ny Traffic, who was a possibility after missing the Cigar Mile (G1) because of a virus.

Trainer Saffie Joseph Jr. told Horse Racing Nation Sunday that the 4-year-old colt will not be ready for Saturday's race.

The only other graded-stakes race this weekend is the Los Alamitos Futurity (G2), offering 10-4-2-1 qualifying points for the 2022 Kentucky Derby.

Probables were not available from the Los Alamitos racing office, but the Horse Racing Nation community has five Bob Baffert colts under consideration. Pinehurst was fifth in the Breeders' Cup Juvenile after scoring in the Del Mar Futurity (G1). Barossa was ninth in the Juvenile after breaking his maiden on his third try in October. Messier is 3: 2-1-0, with a win in the Bob Hope Stakes (G3) last out.

Dennis' Moment returns to graded-stakes company after an on-again, off-again career. The 4-year-old has raced three times this year after a nine-month layoff, picking up his first win of the year as the favorite in an allowance race at Keeneland in October. It also was his first win since the 2019 Iroquois (G3). Although Joseph will not start Ny Traffic here, but he is expected to have Officiating, a 3-year-old Blame colt with a 9: 2-2-2 record this year, and Wind of Change, who finished second his last two outs after winning the listed Tale of the Cat Stakes at Saratoga in August.