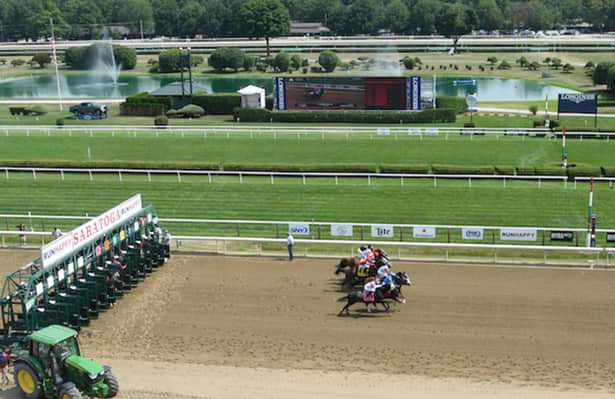 Epicenter and Zandon meet again in the Grade 2 Jim Dandy Saturday at Saratoga, with Early Voting, Tawny Port and Ethereal Road in the mix. Country Grammer could make his first start since Dubai in the San Diego Handicap.

These are just a few of the highlights of the week's graded-stakes calendar. Here's a look at the likely fields.

Frank’s Rockette is winless in two starts this year, losing by a nose to Bella Sofia last out in the Vagrancy Handicap (G3). Bella Sofia is 2-for-2 this year after winning in the Bed o’ Roses (G2) last out. Amadevil, with seven wins and a second in her eight career starts, will try her first graded stakes. Kimari’s last win came in a Gulfstream allowance in March, with a third-place finish in the Madison (G1) and a fifth in the Derby City Distaff (G2) last out.

All five probables here either ran in the Kentucky Derby or were on the trail. Epicenter had won four of five before finishing second in the Kentucky Derby and Preakness, which was his most recent start. Zandon has finished in the money in each of his six career starts and is making his first appearance since finishing third in the Kentucky Derby. Belmont Stakes winner Early Voting sat out the Derby and has three wins and a second in his four career starts. Tawny Port bounced back from his seventh-place finish in the Derby to win the Ohio Derby (G3). Ethereal Road, notable for his scratch from the Derby, won the black-type Sir Barton at Pimlico and then was sixth in the Ohio Derby.

Jackie’s Warrior is the only probable provided for this race. Last year’s champion male sprinter is 3-for-3 this year, winning the Count Fleet Sprint (G3), Churchill Downs (G1) and True North (G2) last out.

American Theorem got his first graded-stakes win last out in the Triple Bend (G2), rallying to win by a nose over Principe Carlo, also expected here. In his only start this year, Howbeit stumbled and lost his rider at the start of the Oak Tree Sprint at Pleasanton. Desmond Doss tries his first graded-stakes after wins in the black-type Thor’s Echo at Santa Anita and Bertrando at Los Alamitos.

Country Grammer, listed as possible, would make his first start since winning the Dubai World Cup (G1). He worked six furlongs in 1:11.4 Sunday at Del Mar. Express Train, winner of last year’s edition, won the San Pascual (G2) and Santa Anita Handicap (G1) to start the year, then was second in the Californian (G2) last out. Mandaloun came back from his ninth-place finish in the Saudi Cup (G1) to finish fourth in the Stephen Foster (G2). There Goes Harvard is 3-for-4 this year and won the Hollywood Gold Cup (G1) last out in his first graded-stakes start.

Corniche, 3-for-3 last year as the champion 2-year-old colt, would make his first start of the year here. Pappacap, second in the Pat Day Mile (G2) and the Woody Stephens (G1), would cut back in distance. Pinehurst would start here for John Terranova. He’s been in the care of Bob Baffert, who is barred from New York Racing Association tracks. Gunite has had only two starts this year, finishing second in a Churchill Downs allowance in June and winning the black-type Maxfield Overnight on July 3.

Eight-year-old Arklow would make his first start of the year here. He’s been working at Saratoga, breezing four furlongs in a bullet 48.19 seconds on Sunday. Rockemperor – second in this race last year – has two starts this year, a fifth-place finish in the Fort Marcy (G2) in May and another fifth in the Manhattan (G1). Soldier Rising, who joined Christophe Clement’s barn last year after starting his career in France, won a Belmont allowance in June and was second by a neck in the black-type Grand Couturier last out.

Beyond Brilliant hasn’t raced since winning the Charles Whittingham (G2) on April 30. Cathkin Peak returns to graded-stakes company after winning a Santa Anita allowance on June 18. Tarantino’s first start of the year came in the June 19 American Stakes (G3), where he finished third.

The top three finishers in the Delaware Oaks (G3) are possible here. Winner Midnight Stroll has one three of four this year but was ninth in the Black-Eyed Susan (G2). Shotgun Hottie, second in the Delaware Oaks, has finished in the money in all four of her starts this year. Juju’s Map’s third-pace finish in the Mother Goose (G2) last out was her second start since finishing second in the Breeders’ Cup Juvenile Fillies. Shahama was sent to Todd Pletcher after starting her career at Meydan. She was sixth in the Kentucky Oaks and second in the Mother Goose.