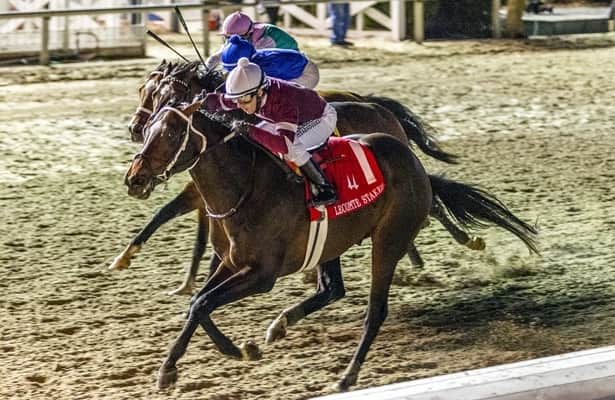 What the week's racing calendar lacks in terms of quantity, it makes up in terms of interest.

At Fair Grounds, Mandaloun returns from a six-month layoff to face Midnight Bourbon again in the Louisiana (G3). Then three colts on the Kentucky Derby leaderboard look to add to their points totals in the Lecomte (G3). And races at Fair Grounds and Aqueduct will award points toward the Kentucky Oaks.

The week's graded stakes kick off with a five 5-year-old mares on the turf. Niege Blanche is coming off a win by a head in the Nov. 25 Red Carpet (G3) and also won the Santa Barbara (G1) last year by a nose. Disappearing Act tries her first graded stakes after posting a 7: 2-1-1 record last year.

Mandaloun and Midnight Bourbon will meet for the sixth time, with Mandaloun holding a 3-2 advantage. Midnight Bourbon's last win came a year ago in the Lecomte (G3) with Mandaloun coming in third. Last out Midnight Bourbon was third in the Clark (G1) on Nov. 26. Mandaloun is coming off a six-month layoff since his victory the Haskell (G1), which he won after Hot Rod Charlie was DQ'd for clipping heels with Midnight Bourbon. Among the challengers to the big two is Warrant, another Brad Cox trainee and stablemate of Mandaloun with a record of 7: 3-3-1 last year, including a score in the Sept. 26 Oklahoma Derby (G3) last out.

This races offers 10-4-2-1 qualifying points for the Kentucky Derby. Pappacap is atop the Derby leaderboard with 12 points earned in second-place finishes to Corniche in both the American Pharoah (G2) and the Breeders' Cup Juvenile. Epicenter has 10 Derby points after winning the Gun Runner. Surfer Dude was third in the Gun Runner, giving him two points. Cyberknife broke his maiden Dec. 26 after finishing second in his first two tries. Cox recently said the Gun Runner colt appears to be his top Kentucky Derby contender.

At least three fillies will pick up their first Kentucky Oaks points here with the race offering 10-4-2-1 points. Only Fannie and Freddie has earned Oaks points, picking up four points for her second-place finish by a neck in the Untapable here Dec. 26. Bernabreezy graduated here on Dec. 20 in a 1 1/16-mile maiden special-weight race in which she hesitated at the start and "unleashed a relentless run in upper stretch" to win by 2 1/4 lengths, according to the chart.

This race also offers 10-4-2-1 Kentucky Oaks points, and Magic Circle is the only expected entrant on the leaderboard. She picked up a point with a third-place finish in the Frizette (G1) in October and two more for her third-place finish in the Demoiselle (G2) here on Dec. 4. Morning Matcha put together a 7: 2-3-2 record last year and finished second in a seven-furlong New York Stallion Series stakes last out. She won her only other attempt at a mile or more.