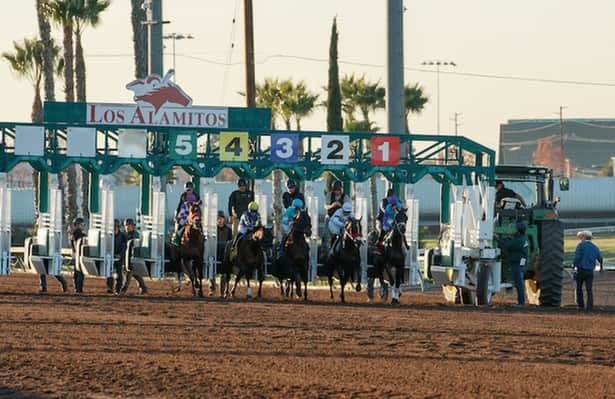 Some weeks have so many graded stakes on the schedule that First Look is longer than Santa’s naughty-and-nice list.

Other weeks are like this one, with only one graded stakes on the calendar. That’s the Grade 1 Starlet at Los Alamitos, which offers 10-4-3-2-1 Kentucky Oaks (G1) points to the top five finishers.

So we’re digging a little deeper, with an early look at the Starlet and other races of interest this weekend, including stakes on Gulfstream Park’s new turf course.

Get expert picks for Oaklawn

Tyler’s Tribe caused a stir when he started his career with five wins at Prairie Meadows before bleeding and being eased in the Breeder’s Cup Juvenile Turf. Trainer Tim Martin said he wants to run Tyler’s Tribe with Lasix, which is not allowed in the Breeders’ Cup or in Kentucky Derby points preps. Frosted Departure is 2-for-7 and winless in three straight stakes starts. How Did He Do That is coming off a 2 1/2-length win in the Zia Park Juvenile at six furlongs.

More than 50 horses were nominated for this Kentucky Oaks points prep, but only two probables could be confirmed Sunday afternoon. Faiza has raced once, winning a six-furlong maiden special weight at Del Mar by 3 1/2 lengths as the odds-on favorite. Doinitthehardway has a record of 3: 0-2-1, and she pulled away with the winner in her last start but couldn’t catch up and lost by a length at one mile.

Congruent switches to turf after compiling a 5: 2-0-1 record, all on dirt, including an eight-place finish in the Breeders’ Cup Juvenile. Todd Pletcher has two here: Sendero, who broke his maiden on second try in a black-type stakes at Colonial Downs then finished fifth in the listed Awad in the Belmont at the Big A meet, and Ari Gold, who broke his maiden on third try at 1 1/16 miles last out at Aqueduct. Lights of Broadway is 2-for-3, all on the Gulfstream synthetic track. Happy Is a Choice broke his maiden last out on third try with a five-length win at Keeneland.

Born Dapper broke her maiden on fourth try, all on turf, and then won the black-type Selima Stakes on dirt at Laurel Park last out. Malleymoo won her only start, in Ireland, before joining Jack Sisterson’s stable. Junipermarshmallow rallied to win her only start, a 1 1/16-mile turf route at Keeneland. Personal Pursuit tried the Matron Stakes (G3) after breaking her maiden. She was bumped hard at the start, according to the Equibase chart, but recovered and improved her position to finish fifth.

Garland of Roses (listed), Aqueduct, 6 furlongs, fillies and mares, 3-year-olds and up

Disco Ebo has won two in a row for her only victories in six starts this year. In her last race she won the Youngstown Oaks by 1 1/2 lengths. Hot Peppers has tried graded stakes her last three starts, with a win in the Victory Rid (G3) followed by a runner-up effort in the Test (G1) and a fourth in the Prioress (G2) last out. Smash Ticket is 3-for-4 this year but finished sixth in the Raven Run (G2) last out.

Five of the top seven finishers in the black-type Scott’s Scoundrel on Nov. 19 are entered here, including winner Who Took the Money, winner of five of his last six starts. Touchuponastar has a record of 5: 3-1-1 this year, his first in competition, and tries for his first stakes win.