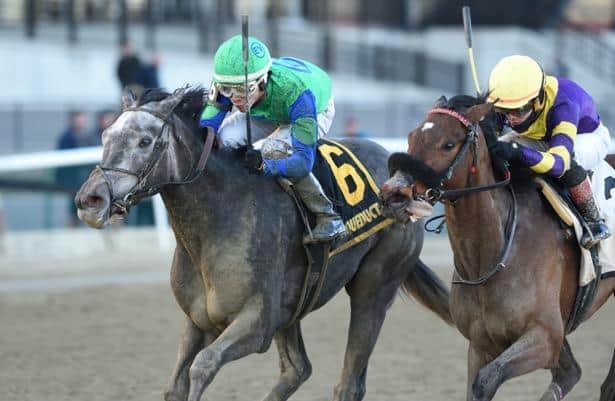 Belmont Park’s biggest day of the year comes Saturday, when it will host five graded-stakes races on the undercard of the $1 million, Belmont Stakes, with an additional $1.1 million up for grabs.

Here’s a look at the prospective fields provided by the New York Racing Association before entries are taken on Wednesday.

Acorn Stakes (G1)
Water White, last seen scoring in the Busher Invitational Stakes at Aqueduct in March, could add to her Kentucky Oaks points total in this one-mile race worth $300,000. The daughter of Conveyance has 54 points on the Oaks leaderboard, and the Acorn provides points on a 50-20-10-5 basis. Trained by Rudy Rodriguez, her previous trip was a second-place finish in the Busanda Stakes at Aqueduct in February.

Undefeated Gamine will ship east from trainer Bob Baffert's base at Santa Anita Park for her stakes foray. The talented daughter of Into Mischief won on debut at Santa Anita on March 7 and came right back to win an allowance/optional claimer at Oaklawn Park on May 2.

Also set to make her stakes bow is highly regarded Casual for trainer Steve Asmussen. The Curlin filly is also 2-for-2, having won on debut at Oaklawn April 11 followed by an allowance/optional claiming win at Churchill Downs on May 22.

Another probable is Venetian Harbor, No. 10 on the Kentucky Oaks leaderboard with 60 points. The last out for this daughter of Munnings was a 2 1/2-length loss to Swiss Skydiver in the Fantasy Stakes (G3) at Oaklawn on May 1. Trained by Richard Baltas, she won the Las Virgenes Stakes (G2) at Santa Anita in February after breaking her maiden in December.

Lucrezia was last seen losing by a nose to Swiss Skydiver in the Gulfstream Park Oaks in March. The daughter of Into Mischief, trained by Edward Seltzer, also scored in the Suncoast Stakes and the Sandpiper Stakes. She’s 11th on the Kentucky Oaks leaderboard with 50 points.

Also, Perfect Alibi will be making her 3-year-old debut. She comes in with six points towards the Kentucky Oaks following a second-place finish in the Alcibiades Stakes (G1) at Keeneland in October and a fourth-place effort in the Breeders’ Cup Juvenile Fillies in November to close out her 2-year-old campaign. The daughter of Sky Mesa is trained by Mark Casse.

Mischevious Alex looks to make it four in a row in this $250,000, seven-furlong sprint for 3-year-olds. It’s a move up in class and a cutback in distance for the son of Into Mischief: His last out was a two-length win in the one-mile Gotham Stakes (G3) at Aqueduct in March, which followed a score in the Swale Stakes (G3) at this same seven-furlong trip at Gulfstream in February. Trainer John Servis had intended to run Mischevious Alex in the April 11 Oaklawn Stakes, but the complications of shipping amid the coronavirus outbreak forced him to train the colt up to this race.

Echo Town is taking on graded-stakes company for the first time. The son of Speightstown, trained by Steve Asmussen, scored in an allowance optional claiming race at Churchill Downs last out on May 25. He broke his maiden on his first try and has finished in the money in all four starts since then.

No Parole will be aiming for better results in his second graded-stakes start. The son of Violence, trained by Tom Amoss, has only one loss in five starts, and that was an eighth-place finish in the Rebel Stakes (G2) at Oaklawn in March. His last start was a six-furlong allowance optional claiming victory at Churchill Downs on April 24.

Decorated Invader will look for his fourth win in six starts in this Grade 2, one-mile turf race for 3-year-olds. The son of Declaration of War won his only start this year, the Cutler Bay Stakes at Gulfstream in March. He earned a Grade 1 victory in the Summer Stakes at Woodbine last September before finishing fourth in the Breeders’ Cup Juvenile Turf at Santa Anita Park to close out his juvenile campaign.

Trainer Graham Motion must have liked what he saw with Maryland Mo when breaking his maiden going 1 1/16-mile at Laurel Park on June 1. He’s listed as possible for this race.

This $250,000 six-furlong turf sprint for older horses is a “Win & You’re In” race for the Breeders’ Cup Turf Sprint. The probables list stands seven strong.

In with a big shot is trainer Christophe Clement, who has three probable starters: Pure Sensation, Shekky Shebaz and White Flag. The 7-year-old Tiger Blood, trained by Steve Klesaris, enters with consecutive wins in an allowance optional claiming race and a starter optional claiming race, both this spring at Gulfstream.

Oleksandra, who won the Franklin County (G3) at Keeneland last year, is expected to ship east for trainer Neil Drysdale following a solid second-place effort in the Monrovia (G3) at Santa Anita after a more than seven-month layoff.

Among the probables for this $150,000, one-mile turf race for 3-year-old fillies is Sweet Melania, a daughter of American Pharoah trained by Todd Pletcher, who will be making her first start since running third in the Breeders’ Cup Juvenile Fillies Turf. Prior to that, she won the Jessamine Stakes (G2) at Keeneland.

Highland Glory is a promising filly for trainer Barclay Tagg who won the Sanibel Island at Gulfstream in March and came back to be second in the May 2 Honey Ryder at Gulfstream.