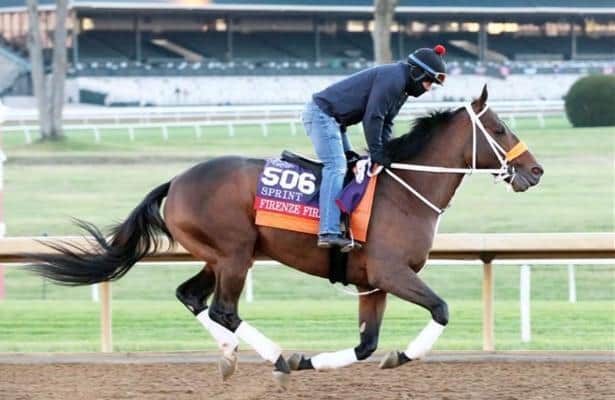 Six graded-stakes events are on tap for this weekend, led by the $250,000 Cigar Mile at Aqueduct.

Horse Racing Nation lists eight probables for the race for 3-year-olds and up, led by Firenze Fire, who is coming off a third-place finish in the Breeders' Cup Sprint for trainer Kelly Breen.

Former Kentucky Derby hopeful King Guillermo could make his return to racing for the first time since his second-place finish in the Arkansas Derby on May 2.

Shug McGaughey could enter Performer, who won four straight to close out 2019 but then did not return to racing until Oct. 17, when he won an allowance optional claiming race last out at this distance at Belmont.

Here is a quick look at the four other graded stakes scheduled for Saturday. Click on the links in the headings to see the entries/probables for each race.

This race offers Kentucky Derby points on a 10-4-2-1 basis, and will be led by Pickin' Time and Ten for Ten, who finished first and second in the Nashua (G3) last out at Aqueduct. Brooklyn Strong and Speaker's Corner are among other intriguing probables in this spot, along with Known Agenda and Civil War.

Todd Pletcher's Malathaat, who broke her maiden on first try at Aqueduct on Oct. 9 then scored in the one-mile Tempted Stakes at Belmont on Nov. 6 leads the probable field for the Demoiselle, which also includes impressive maiden winners; Malibu Curl and Millefeuille.

Todd Pletcher's Nonna Madeline and Horacio DePaz' Sharp Starr lead the probables for this race, which was won last year by Spiced Perfection.

Starlet (G1), Los Alamitos, 1 1/16 miles, 2yo filliesThis Kentucky Oaks prep, which offers 10-4-2-1 points to the top four finishers will feature a showdown between Astute, who has won both of her starts for trainer Richard Mandella, and Bob Baffert's Princess Noor, who could make her first start her since her disappointing fifth-place finish in the Breeders' Cup Juvenile Fillies after three straight wins. Beautiful Gift and Princess Caraway are among the other possibles for this Grade 1 affair.
Bayakoa Stakes (G3), Los Alamitos, 1 1/16 miles, 3yo & up fillies and mares

Los Alamitos reports 12 nominees for Sunday's Bayakoa. These include Warren’s Showtime, who is 4-for-9 in 2020 with all of her victories in stakes — the California Cup Oaks, the China Doll, Melair and the Autumn Miss (G3). Also nominated is the intriguing La Buena Vida, who would be making her first appearance since a 5 3/4-length score in the Alberto Solari Magnasco (G1) in Chile on Nov. 2, 2019.
Demoiselle Remsen Cigar Mile Go For Wand Handicap Starlet Starlet (2020) Go For Wand Handicap (2020) Cigar Mile (2020) Remsen (2020) Demoiselle (2020)