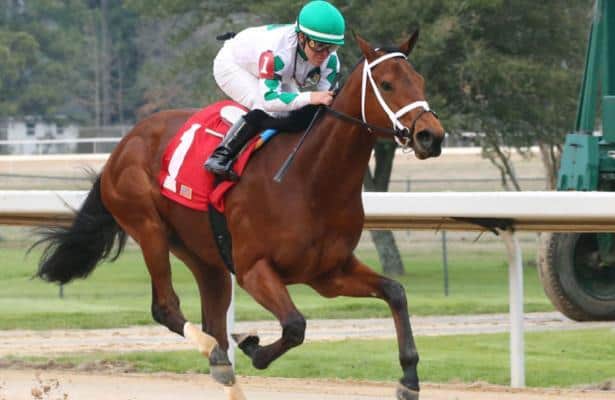 In what it calls the “Road to the Derby Kickoff Day,” Fair Grounds has a slate of six stakes races on the schedule this weekend, including a Kentucky Derby points race, the Grade 3 Lecomte and the Louisiana (G3), led by the returning Wells Bayou.

Santa Anita will host the Astra Stakes (G3) for fillies and mares 4 years old and up. And Tampa Bay Downs’ Pasco on Saturday is for 3-year-olds that could conceivably end up on the Derby trail in the Sam F. Davis, which is a points race on Feb. 6.

Here’s a look at the fields for Saturday’s Fair Grounds stakes.

Offering 10-4-2-1 points toward the Kentucky Derby, this race has two entries that already are on the leaderboard: Steve Asmussen’s Midnight Bourbon, who has 6 points after finishing second in the Iroquois (G3) and third in the Champagne (G1), and Dallas Stewart’s Arabian Prince, who finished third in the Kentucky Jockey Club (G2). Michael Stidham is bringing two “very nice colts” in Proxy and Manor House. Read more about them here.

Wells Bayou makes is return here for the first time since running fifth in the Arkansas Derby (G1) in May. He have to contend with sharp runners who hold a significant fitness edge, including Asmussen's Grade 2-placed Sonneman and Silver Prospector, who defeated Wells Bayou in the 2020 Southwest Stakes (G3) and Tiz the Law in the 2019 Kentucky Jockey Club (G2). Click here for a full preview of this race.

Souper Sensational makes her first start since winning the Glorious Song Stakes at Woodbine in October for trainer Mark Casse. The Curlin filly also broke her maiden on first try to go 2-for-2 last year.

Thomas Amoss brings Littlestitious, who finished in the money in all five of her starts last year. She broke her maiden at Keeneland in October on fourth try and won the My Trusty Cat Stakes at Delta Downs in December.

And Brad Cox brings Divine Comedy and Sun Path, who both won at this track and distance in December.

Archidust looks to build on his win in the Richard R. Scherer Memorial last out in December for trainer Steve Asmussen. Manny Wah has raced 10 times without a win since his last score at Churchill Downs in September 2019. He finished fifth in the 2020 Breeders’ Cup Sprint for trainer Wayne Catalano.

Logical Myth is coming off two wins in a row at Fairgrounds, last in the Buddy Diliberto Memorial on Dec. 19. My Boy Jack is entered both here and in the Louisiana Stakes for trainer Keith Desormeaux. He hasn’t won since the Stonestreet Lexington in April 2018 and last finished 10th in the Seabiscuit Handicap in November.