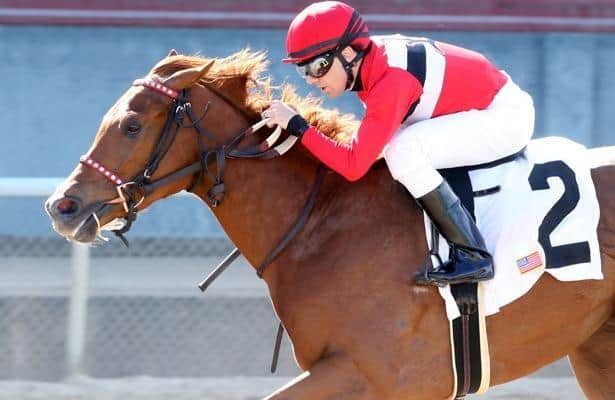 A prep for the 2020 Kentucky Oaks and a turf route for 3-year-olds are on the stakes-race agenda for Delaware Park on Saturday.

Here are the probables for the two stakes races, with entries to be announced on Wednesday.

That race, at the same distance, was won by 1 1/2 lengths by Piece Of My Heart for his second score in a row. Trained by McLean Robertson and owned by Wolfe Racing LLC and Hugh H. Robertson, the daughter of Flat Out broke her maiden on her fifth try in February.

Coming in second in the Gardenia was Steve Asmussen’s Comical, who won the Schuylerville Stakes (G3) last July at Saratoga in her first out since breaking her maiden at Santa Anita last May. She’s winless in seven tries since then.

Christophe Clement’s Gufo and Graham Motion’s Irish Mias are among the probables for this $125,000, 1 1/8-mile turf race for 3-year-olds.

This would be the first graded-stakes effort for Gufo, a son of Declaration of War owned by Otter Bend Stables LLC. He broke his maiden in December at Gulfstream Park on second try and has won his two races since then, including the English Channel Stakes (Black Type) at Gulfstream in May.

Irish Mias, a New Jersey-born homebred owned by Isabelle de Tomaso, is winless in three tries since breaking is maiden in September at Laurel Park. But he’s made the board in each of those efforts, including a fourth-place finish last out in the Kitten’s Joy Stakes (G3) at Gulfstream in January.