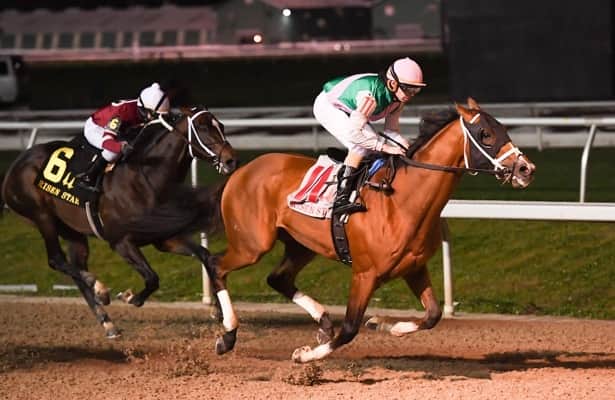 Brad Cox took a tough loss when Caddo River finished fifth during the weekend in the Grade 2 Rebel Stakes, but he is expected to come right back with Mandaloun, another Kentucky Derby contender in Saturday's Grade 2 Louisiana Derby at Fair Grounds.

The winner of the Risen Star (G2) last out, Mandaloun would take on Proxy and Midnight Bourbon, who finished second and third, respectively. The three also finished in the top three in the Lecomte (G3), with Midnight Bourbon prevailing.

[RELATED: Do you agree with the 20 horses atop the Kentucky Derby odds?]

Saturday's Louisiana Derby is the only Kentucky Derby points prep on the calendar this weekend and the first to offer 100-40-20-10 points to the top four finishers.

Also on the card is a Kentucky Oaks prep, the Fair Grounds Oaks (G2), in which Cox's Travel Column will look to avenge her loss by a neck to Clairiere in the Rachel Alexandra (G2). This will be a tiebreaker for the two, since Travel Column beat Clairiere by a length in the Golden Rod (G2) in November. This race offers 100-40-20-10 points toward the Kentucky Oaks, making it an automatic qualifier for the winner.

Here is an early look at those preps and Saturday's other graded stakes.

Mandaloun, Proxy and Midnight Bourbon all are in the top 10 on the Kentucky Derby points leaderboard, so even a second-place finish here would put them in second place behind the winner. Hot Rod Charlie will look for his first win of the year after finishing third in the Robert B. Lewis (G3) at Santa Anita. Run Classic could be a late bloomer for Bret Calhoun. He finished second in his debut in January at Fair Grounds and then won his maiden by 3 1/4 lengths in February.

While the Clairiere-Travel Column showdown is the main storyline, don't overlook Zaajel, who broke her maiden on debut in December and came back to win the Forward Gal (G3) in January for Todd Pletcher. Souper Sensational had a 2-1-0 record in her first three starts before finishing sixth in the Risen Star.

Roadster will make his first start since since moving to Mike Stidham's barn early this year. His last win was the 2019 Santa Anita Derby (G1) for Bob Baffert, and his last race was a second-place finish in the San Carlos (G2) a year ago. Captivating Moon's score in the Fair Grounds Stakes (G3) was his first in 10 starts since winning the Buddy Diliberto Memorial Stakes in December 2019. He also is entered in the Muniz Memorial.

Pegasus World Cup Turf winner Colonel Liam looks for his third win in a row for Todd Pletcher. Factor This had a 7: 5-1-1 record to start 2020 but has not hit the board in three tries since. Cross Border, third in the Pegasus World Cup Turf Invitational (G1), is looking for his first win since the Bowling Green (G2) in August.

United is expected to make his 6-year-old debut here. He won 4 of 6 starts in 2020 and finished eighth in the Breeders' Cup Turf last out. Multiplier returns to stakes company after being claimed in a Feb. 5 race and finishing fourth in an allowance for new trainer Andrew Lerner.

Sound Machine would return to graded-stakes company after finishing third in a Gulfstream allowance race last out. Cory Gal would make her first graded-stakes start here after 28 races. She won three of four allowance races before finishing second last out. Frank's Rockette was a possibility here but instead will run in the April 10 Carousel at Oaklawn.