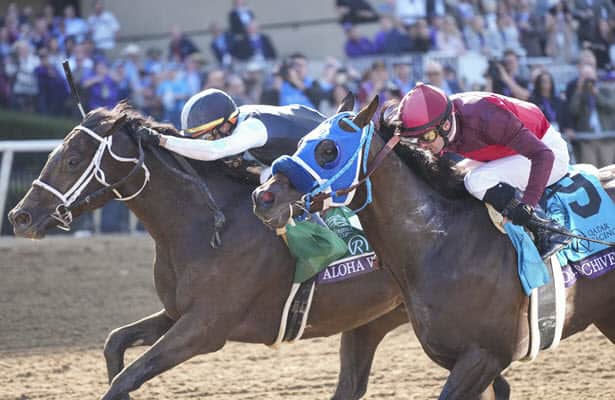 The runner-up in the Breeders' Cup Dirt Mile will try to rebound Saturday in the Grade 1 Cigar Mile at Aqueduct.

Also on the calendar are points races for the Kentucky Derby and Oaks: the Remsen (G2) and Demoiselle (G2) at Aqueduct and the Starlet (G1) at Los Alamitos.

Here is an early look at the early fields for this weekend's graded stakes, all on Saturday.

Ginobili finished second to the formidable Life is Good in the Breeders' Cup Mile. Before that, he beat C Z Rocket in the Pat O'Brien (G2). Code of Honor could be making his last appearance here; he is scheduled to stand at Lane's End next year. In his last start, he finished second in the Fayette (G2), 7 1/4 lengths behind Independence Hall, who also is expected here. Breeders' Cup Sprint winner Aloha West had been under consideration to start here, but owner Aron Wellman of Eclipse Thoroughbred Partners ruled him out, according to BloodHorse.

Zandon graduated on debut at Belmont Park on Oct. 29. Overstep, an Into Mischief colt, was beaten by a half-length in the Oct. 30 Sleepy Hollow after graduating on debut. Third in that race was Who Hoo Thats Me, also expected here. This race offers 10-4-2-1 Kentucky Derby qualifying points.

Magic Circle finished second by a half-length in the listed Tempted Stakes at Belmont with Nest a neck behind in third. Magic Circle was fourth in the Frizette (G1) after breaking her maiden on debut. Tap the Faith rallied to win by a head in her only other start, a maiden special weight at Belmont on Nov. 7. This race offers 10-4-2-1 Kentucky Oaks qualifying points.

The New York Racing Association listed only four probables for this contest, and they all are 4-year-olds who won their last races. Sharp Starr won last year's edition of this race by a neck. Bella Vita has made nine starts this year, with three wins and three seconds.

Grace Adler won her first two starts, including an 11 1/4-length score in the Debutante (G1), before a fifth-place finish in the Chandelier (G2). Eda, fifth in the Debutante, won both of her starts since then. This race offers 10-4-2-1 Kentucky Oaks qualifying points.

Probables were not available for the Valedictory (G2) at Woodbine, a 1 1/2-mile contest for 3-year-olds and up.