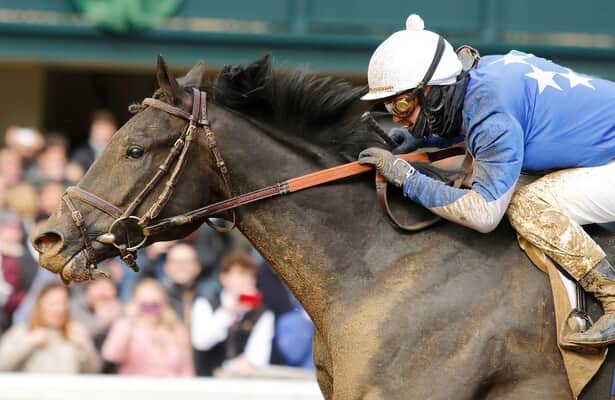 Will Zandon break his string of close-but-no-cigar finishes Saturday in the Grade 1 Cigar Mile Handicap? Who will pick up points for the Kentucky Derby and Oaks?

We’ll find out this weekend when Aqueduct and Del Mar offer eight graded stakes, which also include the Grade 1 Hollywood Derby and Matriarch.

Here’s an early look at the likely fields.

Zandon has finished in the money in each of his eight career starts but hasn’t won in four graded-stakes starts since the Blue Grass (G1) in April. Last out he was beaten three lengths by Taiba in the Pennsylvania Derby (G1), where White Abarrio, also expected here, finished fifth. In Mind Control’s last six starts, three have been at a mile, and they were the only three he won in that stretch. Double Crown and Baby Yoda meet again after finishing 1-2 in the Kelso (G2) here last month.

Tuskegee Airmen is 2-for-2, including a stakes win. Prove Right has the most experience, with eight starts. He broke his maiden on second try in June and hasn’t won since, losing his lead in the Nashua (G3) last out after weakening late. Arctic Arrogance has a record of 3: 2-1-0, with a 4 1/2-length win last out over Quick to Accuse, also expected here.

Julia Shining is a Curlin filly who won her only start by 2 3/4 lengths over 11 rivals. Foggy Night is 1-for-4, and Tribal Queen broke her maiden last out in her third try.

Battle Bling has a record of 9: 4-4-0 this year and has won three straight. She led gate to wire to win the Turnback the Alarm (G3) here last out. Love in the Air has a two-race win streak and has finished in the money in each of her six starts this year.

Cabo Spirit caught Speaking Scout to win the Twilight Derby (G2) last out. Celestial City has a record of 9: 3-2-2, with all of his starts this year. His Hill Prince (G2) victory last out was his first graded win. Evan Harlan is coming off a maiden win in his fifth start, all in-the-money finishes. Wit was caught by a neck last out in the Bryan Station (G3).

Look for a full field of 14 in this one. Private Credit won her maiden by 4 1/4 lengths going one mile on her second try last out. Pleasant Wave also is coming off a maiden victory, winning by a neck at five furlongs on this track. Another second-start maiden winner is Ragtime Rose, scoring at six furlongs on the Santa Anita turf.

Regal Glory, winner of last year's Matriarch, is looking for her first win since the Just A Game (G1) in June. Wakanaka bounced back from his seventh-place finish in the Woodbine Mile (G1) to win the black-type Fall Harvest at Keeneland. Bipartisanship got her first win of the year last out in her second start off the bench, a come-from-behind score in the black-type Kathryn Cosby on this track. Dolce Zel moved to Chad Brown’s barn this year after racing in France, and he has guided her to a 5: 2-1-2 record, including wins in the Florida Oaks (G3) and Lake George (G3).

Classical Cat won his debut, finished seventh in the Del Mar Futurity (G1) and came back with a win in a Santa Anita allowance last out. Disdainful raced twice in the United Kingdom before coming to Graham Motion and finishing second in a Keeneland allowance. Lloyds Logic has raced only at Emerald Downs, winning his last two.

Probables were not available for the Valedictory Stakes (G3) at Woodbine on Sunday.