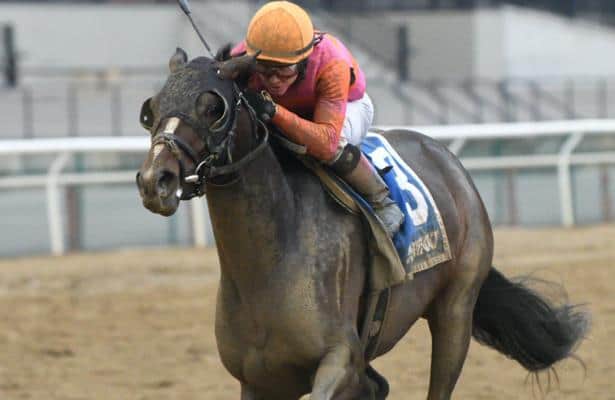 Pimlico Race Course in Baltimore gets its turn in the national spotlight next weekend when it hosts the second jewel of the Triple Crown, the $1 million Preakness Stakes, along with an array of supporting stakes on Friday and Saturday.

Entries for Friday’s program, which features six stakes – four of them graded – will be taken on Sunday by the Pimlico racing office. Entries and the post-position draw for the Preakness card will be done on Monday. Here’s an early look at how the graded-stakes fields are shaping up.

$150,000 Allaire duPont Distaff (G3), 1 1/8 miles, 3-year-old & up (F&M)
Horologist, Mrs. Danvers and Lucky Stride all head south after filling the Trifecta in the April 10 Top Flight Invitational at Aqueduct. Horologist, who was making her first start since an off-the-board finish in the Breeders’ Cup Distaff, pressed pacesetter Mrs. Danvers before taking over in mid-stretch and scoring by a length. Lucky Stride was another quarter-length back in third.

Spice is Nice exits a win in a high-level allowance at Keeneland on April 9 when making her first start since last August’s Alabama (G1) at Saratoga. She was Grade 2-placed last year and could move forward with recency.

Getridofwhatailesu was beaten just two lengths when third behind winner Shedaresthedevil and Letruska in the Azeri (G2) in March, then came back to be fourth behind the star-studded triumvirate of Letruska, Monomoy Girl and Swiss Skydiver in the April 17 Apple Blossom (G1).

$150,000 Miss Preakness (G3), 6 furlongs, 3-year-old fillies
Abrogate will wheel back in two weeks after checking in fifth in the seven-furlong Eight Belles (G2) on April 30. In her race prior, the lightly raced filly earned a first stakes win in the Purple Martin at Oaklawn Park when besting Joyful Cadence by a half length.

Joyful Cadence was making just her third start in the April 3 Purple Martin and it followed a smashing 8 3/4-length maiden win at Oaklawn Park a month earlier.

Street Lute is the local star, sporting a stellar record of 9: 7-1-1 with multiple stakes wins across town at Laurel Park. She will cut back in distance after suffering just her second loss in the one-mile Beyond the Wire at Laurel on March 13.

$250,000 Pimlico Special (G3), 1 3/16 miles, 3-year-olds & up
This veteran group includes the return of Max Player, who will be making his first start since the rich Saudi Cup on Feb. 20 when he was never a factor. Last year, Max Player was third in both the Belmont and Travers (G1) and fifth in both the Kentucky Derby and Preakness.

Enforceable, also a veteran of last year’s Kentucky Derby, made four starts at Fair Grounds this winter. Most recently, he was beaten just a half-length by Chess Chief in the March 20 New Orleans Handicap (G2).

Fearless won the Gulfstream Park Mile (G2) in February and came back to beaten just a half-length by Silver State in the April 17 Oaklawn Handicap, while Modernist exits a sharp 2 1/2-length win in the Excelsior (G3) at Aqueduct.

The Grass is Blue, who won the Busanda at Aqueduct earlier this year, is listed as “50-50” to run by the Pimlico racing office.