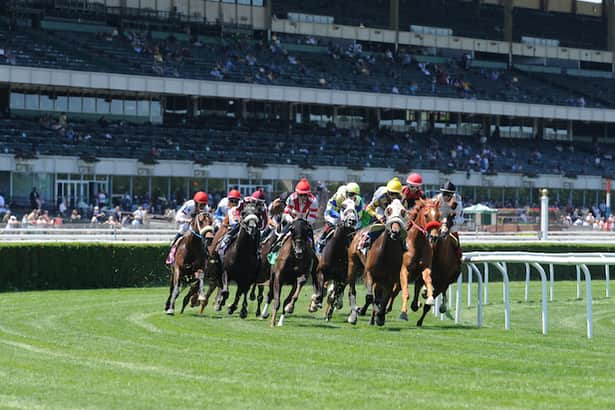 Belmont Park leads the weekend graded-stakes calendar with four big races on Saturday. Kenny McPeek tries two on turf for the Grade 1 Belmont Derby, and Cairo Memories looks to make it three in a since switching to grass.

Belmont Park and Horseshoe Indianapolis races will be drawn on Monday. Here is a look at the likely fields for this weekend's graded stakes.

Tiz the Bomb is expected to switch back to turf for his first start since finishing ninth in the Kentucky Derby. He won two turf races last year and was second in the Breeders' Cup Juvenile Turf. Classic Causeway would make his first start on turf here; he was 11th in the Florida Derby (G1) and the Kentucky Derby before hitting the board in the Ohio Derby (G3) last out. Emmanuel led gate to wire in the Pennine Ridge (G2) for his second win in four starts this year.

After two losses on dirt, Cairo Memories has won her last two on turf – both in graded stakes. This would be her first start outside of California. In her only start since finishing third in the Breeders' Cup Juvenile Fillies Turf, Haughty won the Penn Oaks by 4 3/4 lengths. After a seven-month layoff, McKulick has finished second in both her starts this year, the Edgewood (G2) and the Regret (G3). Warrant has a record of 11: 3-5-2 and is looking for his first win since last year's Oklahoma Derby (G3).

Max Player has failed to hit the board in three starts since winning last year's Suburban and the Jockey Club Gold Cup (G1). First Captain, winner of three straight to start his career last year, came off a seven-month layoff to win an optional claiming race, finish seventh in the Carter (G1) and then win the Pimlico Special (G3).

Happy Soul came off the bench to win the Dixie Belle but is 0-for-2 since. Hot Peppers – who is 4-for-5 – and Stand Up Comic (0-for-1) finished 1-2 last out in the Jersey Girl. Since winning the Purple Martin in March, Pretty Birdie was second in the Eight Belles (G2) and the Leslie's Lady.

Rated R Superstar – third in this race the last two years – looks for his second graded-stakes win of the year. He scored in the Essex (G3) in March. Silver Prospector's win in the Steve Sexton Mile (G3) – where he bested Rated R Superstar and Flash of Mischief – was his first victory since an optional claiming race in October 2020. Warrant has finished in the money in 10 of 11 starts but doesn't have a win since last year's Oklahoma Derby (G3). Officiating has two graded-stakes wins in his last five starts, taking the Mr. Prospector (G3) and Tom Fool (G3).

Miss Hard Knocks started the year with three wins but has finished no better than sixth in three starts since. Candy Raid – ninth in the Kentucky Oaks – has won win this year, in Turfway's black-type Bourbonette. With a career record of 13: 7-3-2, Free Like a Girl has won two of three starts this year.

Probables were not available for the Indiana Derby (G3) and Indiana Oaks (G3) at Horseshoe Indianapolis or for the Delaware Handicap (G2) and Robert G. Dick (G3) at Delaware Park.