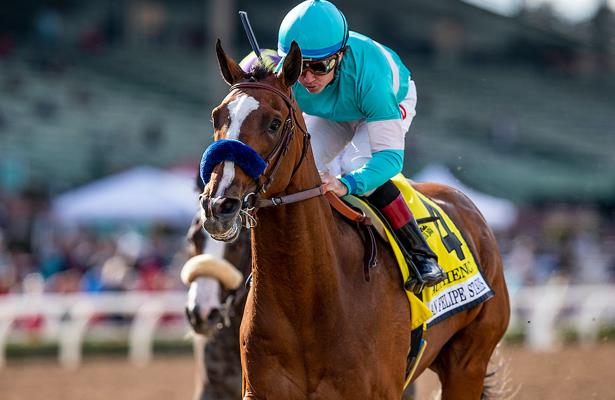 There are a total of seven stakes set for Santa Anita Saturday with the $200,000 Triple Bend (G2), featuring the return of McKinzie, providing a Sunday curtain call.

Below is a first look at the projected fields for the four graded stakes on tap at Santa Anita this weekend.

Authentic improved to 3-for-3 when winning the San Felipe in front-running fashion for trainer Bob Baffert. The son of Into Mischief worked a stiff seven furlongs on May 10 and followed with three straight bullet six-furlong drills, indicating Baffert has tightened the screws on this colt. Drayden Van Dyke will again have the call.

Honor A. P. was coming off a 19-week layoff and facing winners for the first time when runner-up to Authentic, beaten 2 ¼ lengths, in the March 7 San Felipe Stakes (G2) at Santa Anita. Expected to relish the added distance of the Derby, the son of Honor Code has been training steadily since then for Kentucky Derby-winning trainer John Shirreffs. Honor A. P. will again have the services of Hall of Fame jockey Mike Smith.

The intriguing newcomers expected are Shooters Shoot and Rushie, who both exit impressive allowance wins at Oaklawn Park. Shooters Shoot outlasted stakes runner Blackberry Wine when going a mile in an absolute slugfest on April 11 for trainer Peter Eurton. The effort followed a maiden-breaking win at Santa Anita for the son of Competitive Edge.

Rushie prevailed against a deep 12-horse field at Oaklawn on May 2 when going a mile and a sixteenth for trainer Michael McCarthy. The son of Liam’s Map shows three works since that effort, including a five-furlong move in :59.80 on Saturday.

In what's no longer the Gold Cup at Santa Anita, but again its original name of the Hollywood Gold Cup, a six-pack of older runners is projected for this 10-furlong test. Among the probables reported by the Santa Anita racing office are Grade 1 winners Higher Power and Improbable, as well as multiple graded stakes winner Midcourt for Shirreffs.

Improbable kicked off his 4-year-old season with a runner-up finish to Tom’s d’Etat in the April 11 Oaklawn Mile Stakes. It was his first start since finishing off the board in the Breeders’ Cup Dirt Mile on Nov. 2 at Santa Anita. Trained by Baffert, the son of City Zip's most recent training regiment has included a pair of seven-furlong works and a one-mile drill completed in 1:37.60.

Higher Power reached a career pinnacle last summer when winning the 1 1/4-mile Pacific Classic (G1) in front-running fashion at Del Mar. The 5-year-old son of Medaglia d’Oro ended last year with a third-place finish in the Breeders’ Cup Classic, and in his only start this season checked in dead last as the favorite in the Jan. 25 Pegasus World Cup (G1) at Gulfstream Park.

Midcourt started his 5-year-old campaign with a win in the San Pasqual (G2) and came back to be beaten about a half-length when a close-up third in the 10-furlong Santa Anita Handicap (G1) on March 7. Hall of Famer Victor Espinoza had the call in the Big ‘Cap and is expected to be in the irons.

Another small field is projected in this 1 1/16-mile prep for the Kentucky Oaks. The headliner is Swiss Skydiver for trainer Kenny McPeek. The daughter of Daredevil was originally slotted for a trip overseas following her breakout win in the May 1 Fantasy (G3) at Oaklawn, but was rerouted to this spot due to travel concerns.

As a two-time graded winner, Swiss Skydiver holds a big class edge over her projected foes. Baffert is considering three fillies, including the undefeated Gamine. The daughter of Into Mischief made it 2-for-2 when narrowly defeating likely Santa Anita Oaks rival Speech in an allowance at Oaklawn on May 2.

It was later reported Gamine was one of two horses on the program from the Baffert barn to test positive for a drug overage. The substance was reportedly Lidocaine, which is a permissible treatment but cannot exceed a certain threshold on race day.

While Gamine was listed as possible by Santa Anita, Baffert said Monday it's more likely he enters Gingham and Merneith with Gamine likely ticketed for the Grade 1 Acorn at Belmont Park on June 20.

A field of eight is projected for this six-furlong sprint on the main track. McKinzie will be cutting back in distance following an uncharacteristically dull effort in the rich Saudi Cup in Riyadh on Feb. 29. While racing at exclusively a mile or more last season, McKinzie is also a Grade 1-winning sprinter having won the 2018 Malibu (G1) at Santa Anita.

The horse to beat could be Flagstaff for trainer John Sadler. The son of Speightstown exits a frustrating second in the Count Fleet (G3) at Oaklawn, where he broke slowly and had to circle the field before coming up 3/4 of a length short of Whitmore. Flagstaff won the San Carlos (G2) at Santa Anita in the race prior.