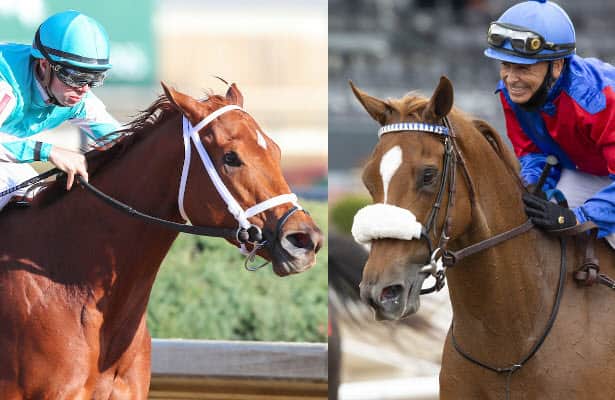 Saturday's showdown in the Grade 1 Apple Blossom between Monomoy Girl and Swiss Skydiver looks to be scaring off the competition. As of Sunday, only one other probable was listed by the Oaklawn racing office. Interest is likely to pick up, of course, with s $1 million purse on offer.

The matchup between 2020 Eclipse winners comes on the first weekend since February without a Kentucky Derby points prep.

[RELATED – McPeek: Swiss Skydiver is 'a beast' ahead of Apple Blossom]

Here is an early look at the likely fields for the Apple Blossom and six other graded stakes this weekend.

At last check with the Oaklawn racing office, Letruska was the only one who had stepped up to challenge Swiss Skydiver and Monomoy Girl. She won the Rampart Stakes (G3) and the Houston Ladies Classic (G3) before finishing second to Shedaresthedevil in the Azeri (G2). Horse Racing Nation had included Brad Cox's Getridofwhatailesu and Chris Hartman's Chance to Shine as possible entries, but they weren't offered up by the racing office on Sunday.

Speech was 3-3-2 in her first eight starts before finishing sixth in the Breeders' Cup Filly & Mare Sprint for Mike McCarthy. Bonny South finished 2020 with three runner-up efforts, all in graded stakes.

Cox told HRN last week that Owendale was pointed toward this race and that Warrior's Charge might join him, depending on how the field shapes up. Fearless' win in the Gulfstream Park Mile (G2) was his first start off an eight-month layoff.

Country Grammer, unraced since finishing fifth in last year's Travers (G1), was scratched by his new connections from a Saturday allowance race at Santa Anita Park to point here. Before his runner-up effort in the Santa Anita Handicap (G1), Express Train won the San Pasqual (G2).

Multiplier's fifth-place finish in the San Luis Rey (G3) was his second start after being claimed by Biggleague Racing LLC and trainer Tim Lerner in a $50,000 race in February. Tizamagician was second in the delayed edition of this race last year, and he also was runner-up in the San Pasqual (G2).

This would be the second start off an eight-month layoff for Cistron, whose two races last year included a score in the San Simeon Stakes (G3). Brickyard Ride – a starter in nine races last year – is 2-for-2 this year. Bob Baffert has four nominated here, including Cezanne, and is expected to start at least one.