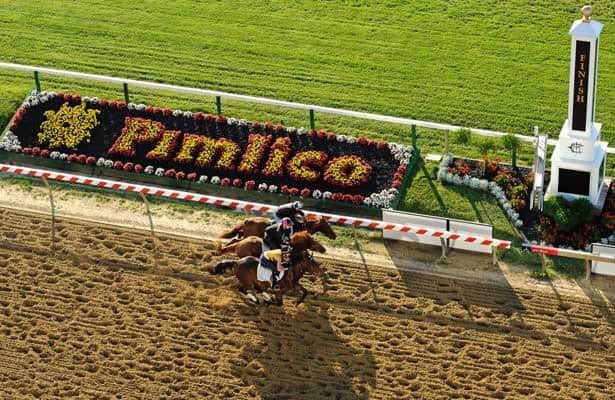 The Preakness Stakes is the center of attention this week, but 11 other graded stakes are on the calendar.

You can read more about the Preakness here. And click here to see the likely fields for Friday's four graded stakes at Pimlico, including the Black-Eyed Susan.

Here is a look at the early fields of seven other graded stakes on Saturday.

This would be the second start off a layoff for Sacred Life, who finished third in the Maker's Mark Mile (G2) on April 9. Before that, he was fourth in the Turf Classic (G1) in September, on the Kentucky Derby undercard. Kuramata has won both of his North American starts for Chad Brown, breaking his maiden in February and scoring in an allowance race in April.

Mean Mary looks to return to her winning ways after finishing seventh in the Breeders' Cup Filly and Mare Turf. She was undefeated in her first three starts last year – all graded stakes – before finishing second in the Diana (G1). Great Island has finished in the money in each of her five starts, scoring in the listed Suwanee River last out in February.

Steve Asmussen has two promising colts here. Mighty Mischief is 2-1 in three starts this year, all at six furlongs. And Jaxon Traveler is 4-1 in five starts, winning the listed Bachelor Stakes last out.

Invincible Gal – off since November – has finished first or second in four of her five starts. The other start was an 11th-place finish in the Breeders' Cup Juvenile Fillies Turf. Tobys Heart is 3-for-4, with the wins all at 5 1/2 furlongs and a sixth-place finish at 1 1/16 miles.

Only six horses were nominated for this spot, and they all were expected to run as of Sunday. Wipe the Slate is cutting back in distance after coming in six and seventh, respectively, in the 1 1/16-mile Robert B. Lewis (G3) and the one-mile Gotham (G3). Good with People will look to avenge his 1 1/4-length loss to The Chosen Vron in the black-type Echo Eddie Stakes on April 3.

It looks like this race will be difficult to fill, said Santa Anita stakes coordinator James Kasparoff. Only nine were nominated, and several of them have reasons to sit this one out. If it does go off, Venetian Harbor would make her first appearance since finishing eighth in the Breeders' Cup Filly and Mare Sprint. Before that, she was first or second in each of her seven starts.