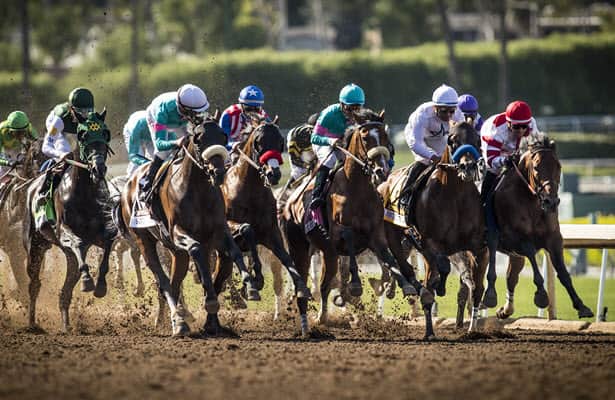 The graded-stakes pace picks up this weekend, with seven races on the calendar at four tracks: Belmont Park, Monmouth Park, Woodbine and Santa Anita. Plus, Churchill Downs' eighth race on Friday is packed with stakes runners.

Raging Bull kicked off his 2021 campaign by winning the Maker's Mark Mile (G1) at Keeneland in April. It was the 12th consecutive Grade 1 start. Oleksandra returns to graded-stakes company for the first time since throwing his rider after clipping heels and throwing his rider in the Las Cienegas (G3) in January. Last out, he finished fifth in the Unbridled Sidney Stakes.

Nay Lady Nay would make his second start of the year after finishing fourth in the Beaugay Stakes (G3) last month. Counterparty Risk has one win in three starts this year, scoring in the Endeavour (G3) in February.

This would be a rematch for Leggs Galore and Warren's Showtime, who finished 1-2 in the May 9 black-type Fran's Valentine Stakes. The start would be the first graded stakes for Leggs Galore, who has won six of her last seven starts. Warren's Showtime returns to graded stakes after third-place finishes in the Royal Heroine (G2) and Buena Vista (G2).

This would be the 2021 debut for Neptune's Storm, whose last win came in the San Francisco Mile (G3) in June. Tatters to Riches has had a much longer layoff; his last start was an eighth-place finish in the 2018 San Antonio Stakes (G2).

With Woodbine just opening for the year, the fields for their upcoming graded stakes are still in flux. The track has two graded stakes scheduled for this weekend:

As for that eighth race at Churchill Downs on Friday, the field features several stakes runners regrouping, including Enforceable and Finnick the Fierce from last year's Kentucky Derby. Treasure Trove and Enforceable both were off the board in the May 15 Pimlico Special, finishing seventh and ninth, respectively. Sonneman's most recent start was a fifth-place finish in the Alysheba (G2). And Core Belief's graded-stakes wins include the 2018 Ohio Derby (G3) and the 2019 New Orleans Handicap (G2). See the field here.