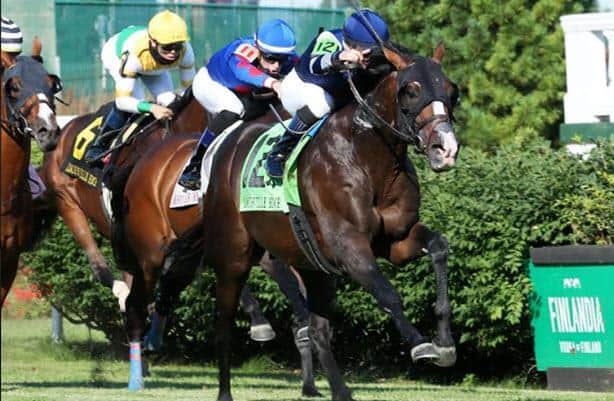 Although the Belmont Stakes festival is still more than a week away, the first weekend of June features seven graded stakes races at five different tracks from coast to coast.

With the weather getting warmer, turf racing has come fully into season. All but one of the week's graded races are carded for the grass, including the Penn Mile and the Pennine Ridge, two of the earlier features of the sophomore grass racing season.

Here is an early look at the probable fields.

The field of the 2022 Penn Mile has been drawn. Undefeated Annapolis, making his first start since winning the 2021 Pilgrim (G2), has been named the 9-5 morning line favorite. 5-2 second choice Red Danger, a two-time stakes winner as a juvenile, most recently finished seventh in the American Turf (G2). Fort Washington, the 7-2 third choice on the morning line, tries graded company for the first time after a pair of stakes placings this year.

Trainer Chad Brown, who has won two of the eight runnings of this race, conditions Unanimous Consent, Credit Event and Napoleonic War. Unanimous Consent has won all three career starts, most recently the Woodhaven Stakes on April 23 at Aqueduct. Credit Event broke his maiden on debut at Gulfstream, and hopes to rebound from a troubled 10th in an allowance at Keeneland April 16. Napoleonic War was fourth in the Transylvania (G3) at Keeneland, but rebounded May 5 at Belmont with an allowance optional claiming win. Limited Liability ran third in two graded stakes starts last year and won his allowance return April 16 at Keeneland.

McKulick, a daughter of Frankel, broke her maiden on debut at Saratoga and finished third in the Miss Grillo (G2) last year; she finished second in the Edgewood (G2) in her sophomore debut. On April 9 Skims finished third behind Royal Ascot-bound Spenderella in the Appalachian (G2), her graded stakes debut. Candy Raid shocked the Bourbonette Oaks at 52-1 and then finished ninth in the Kentucky Oaks (G1), but missed the board in two starts over grass.

In his first race in nine month Floriform finished third behind Shirl's Speight in the 2022 Tampa Bay Stakes (G3), then followed that up with an allowance win April 27 at Keeneland. Gray's Fable returns to graded company after winning the Opening Verse Overnight Stakes on May 5. Admission Office, who won the Louisville Stakes (G3) at Churchill Downs in 2020, will make his first start off of a 15-month layoff.

Lady Mystify, who upset the Remington Park Oaks (G3) over Pauline's Pearl last September, leads the probables for the Desert Stormer. She was most recently fourth behind Malathaat in the Doubledogdare (G3) at Keeneland on April 22. Dance to the Music, second in the 2021 Del Mar Debutante (G1), won her three-year-old debut May 7 in an allowance at Santa Anita. Top California-bred Becca Taylor, seven-for-eight lifetime, lost for the first time two starts ago in the Irish O'Brien Stakes at Santa Anita March 19 but returned to winning form in a sprint allowance May 7 at Golden Gate Fields.

Probables for the Royal North, the first turf stakes of the 2022 Woodbine meet, were not yet available. It drew 23 nominations including all three horses in the blanket-finish top three from 2021: Amalfi Coast, Jeanie B, and Change of Control. The race will be drawn Wednesday.

Gam's Mission has been second in both of her starts this year, but returns to Churchill Downs for the first time since winning the Regret (G3) in 2021. Hendy Woods and Lake Lucerne, who finished third and fourth in the Modesty (G3) on May 6, return to the course. Dalika will make her six-year-old debut in the Mint Julep; she has not run since finishing ninth in the First Lady (G1) on October 9 of last year.

What we learned: Compact Fourstardave helps Casa Creed win
Despite a moderate pace along with an uncontested...