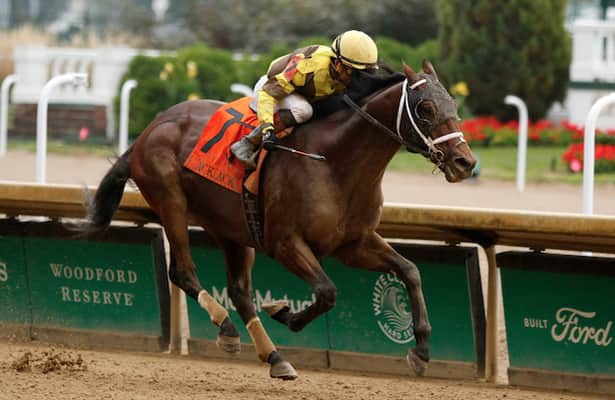 Brad Cox has decided to send Plainsman to Belmont instead of to Del Mar for the Breeder's Cup. And Rock Your World switches back to turf, where his career got off to such a promising start.

These are some of the storylines for this weekend's six graded stakes. Here is an early look at the likely fields.

Crazy Beautiful has won four of seven starts this year and is coming off a neck victory in the black-type Seneca Overnight at Churchill Downs. Tobys Heart's win in the black-type Music City followed a third-place finish in the Lake George (G3). Lady Speightspeare is 3-for-3 but has raced only once this year, winning an allowance race at Woodbine last month.

Code of Honor is expected to return here after his fourth-place finish in the Woodward (G1), where he was bested by Art Collector and Maxfield in his second start after a layoff. Sleepy Eyes Todd also was defeated by Maxfield, beaten 1 1/2 lengths in the Charles Town Classic (G2). King Fury would return to graded-stakes company here after winning the black-type Bourbon Trail at Churchill Downs by 13 lengths.

Madone has two graded-stakes victories this year, in the Senorita (G3) and the San Clemente (G2). Spanish Loveaffair got her first win in more than a year in the listed Pebbles Stakes at Belmont. Zero Tolerance, unraced as a 2-year-old, has a 3: 2-1-0 record this year.

Rock Your World returns to the turf after four losses on dirt. The first two starts of his career, both this year, were wins on turf. Seven runners from the Del Park Derby (G2) return here, including winner None Above the Law, who has five wins in 10 starts this year.

Plainsman, was widely expected to start next in the Breeders' Cup Dirt Mile, but trainer Brad Cox confirmed to Horse Racing Nation that he will cut back in distance here. His win in the Ack Ack (G3) was his fourth score in his last five starts, with the lone loss a runner-up effort in the listed Governor's Cup. Drafted and Endorsed have yet to win this year, and Wendell Fong would get his first start since finishing second in the Tom Fool (G3) in March.

Probables were not available for Woodbine's Ontario Derby (G3), at 1 1/8 miles for 3-year-olds.