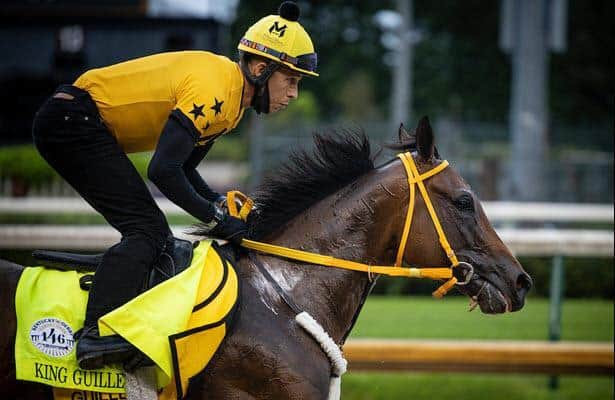 King Guillermo is expected to return to graded-stakes company this weekend in the Grade 2 Fort Lauderdale at Gulfstream.

The 4-year-old colt gained attention last year after winning the Tampa Bay Derby (G2) and finishing second in the Arkansas Derby (G1). But he has not finished in the money since and took a break after an eighth-place finish in the Santa Anita Handicap (G1) in March. He returned to finish fourth in a Gulfstream handicap in October.

The Fort Lauderdale would be King Guillermo's first start on turf since his third-place finish in the Pulpit at Gulfstream in 2019.

The Fort Lauderdale is one of five graded-stakes races on the North America calendar this weekend – all at Gulfstream on Saturday. Also on tap is the Springboard Mile at Remington Park on Friday, with 10-4-2-1 qualifying points available for the Kentucky Derby.

As noted above, this race offers Kentucky Derby qualifying points to the top four finishers – but only those in the top four who run without Lasix. Make It Big, whose 2-for-2 record includes a last-out win in a Florida-bred stakes, is the likely favorite and will run without Lasix. One starter who will use Lasix is Steve Asmussen's Classic Moment, who broke his maiden on second try last out at Churchill Downs.

Sole Volante won four of his first six races, finishing second and third in the other two. In eight starts since, he has finished no better than fourth. In his last start, he finished sixth in the Sycamore (G3) on Oct. 22 at Keeneland. Breaking the Rules took a break after finishing ninth in the Pegasus World Cup Turf (G1), returning with an allowance win at Saratoga in August. He then was sixth in the Knickerbocker (G3) and seventh in the listed Artie Schiller last out.

Allworthy's eighth-place finish in the Cotillion (G1) last out was the first time in seven starts that she failed to make the board. Trainer Saffie Joseph Jr., a part-owner of Allworthy, also is expected to enter Queen Nekia, whose last win came in the Royal Delta (G3) at this track in February. Dance d'Oro won an allowance race here by 9 1/4 lengths in September before finishing third in a handicap on Nov. 21.

Frank's Rockette has compiled a 7: 2-1-3 record this year, finishing third last out in the listed Dream Supreme at Churchill Downs last month. Center Aisle made her first start of the year in October and has two allowance races.

Alms will be making her third start since coming off a 15-month layoff in October. In her last start, she was beaten by a neck in the black-type Joseph R. Peluso Memorial at Fair Grounds. In a hurry has a 7: 1-2-2 record this year and finished fourth in the Nobel Damsel last out behind Shifty She, who also is expected here.

Mighty Heart has a 7: 3-2-1 record for the year and is coming off a win in the Autumn Stakes (G2) at Woodbine. Fearless came off a six-month layoff to finish second in a Gulfstream handicap last out. He has a record of 4: 1-2-1 this year.