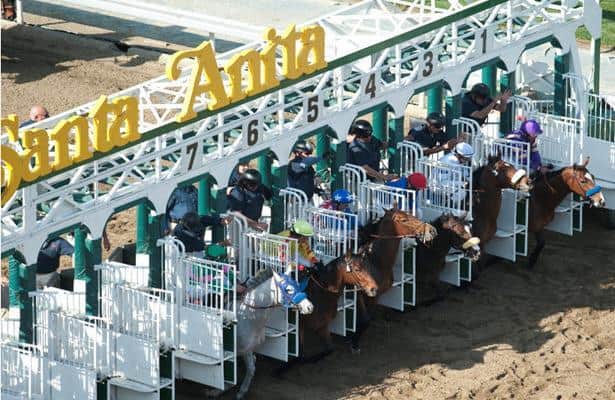 The holiday stakes continue at Santa Anita this weekend with four graded stakes, including the Grade 3 Sham, with Kentucky Derby qualifying points up for grabs.

The Sham is one of three Kentucky Derby qualifying events this weekend, with Aqueduct hosting the Jerome and Oaklawn offering the Smarty Jones.

Here is an early look at the possible fields.

Dogtag finished second in each of her first four starts of the year and then third in the Rodeo Drive (G1) before a 10th-place finish in the Breeders' Cup Filly and Mare Turf. Mucho Unusual has two wins and two runner-up efforts in four starts this year, winning an allowance race by a nose last out. Moraz broke her maiden in January and then lost her next six starts before winning an allowance last out.

Caribou Club has one win in four starts this year and hasn't raced since a sixth-place finish in the Oct. 1 Eddie D (G2) at Santa Anita. Hit the Road started the year by winning the Thunder Road (G3) and the Frank E. Kilroe Mile (G1) at Santa Anita. He cuts back in distance here after going a mile in all but the first of his 12 career starts.

As Time Goes By and Moonlight d'Oro meet again after finishing first and third, respectively, in the Bayakoa (G3). Second in that race was Warren's Showtime, who was nominated here but is not expected to be entered. Javanica's only win in six starts this year came in a July allowance at Del Mar.

This race is a Kentucky Derby qualifier, offering 10-4-2-1 Kentucky Derby points to the top four finishers. Mackinnon has three wins in six starts and was third in the Breeders' Cup Juvenile Turf last out. Bob Baffert could have as many as four starters, including Doppelganger and Newgrange, both of whom won on debut in their last starts.

Osbourne graduated in his second start and then finished second to Make It Big in the Remington Springboard Mile. Vivar won two straight before a sixth-place finish in the Kentucky Jockey Club (G2), won by Smile Happy. Brad Cox's other possibility, Homebrew, has two wins and a second in three starts. This race also is a Kentucky Derby qualifier, offering 10-4-2-1 points.

Courvoisier won by a neck to break his maiden on his fourth try, giving him a 4: 1-2-1 record this year. Life is Great graduated on his fifth try with a 6 3/4-length win at Aqueduct. This race also offers 10-4-2-1 Kentucky Derby qualifying points to the top four finishers.