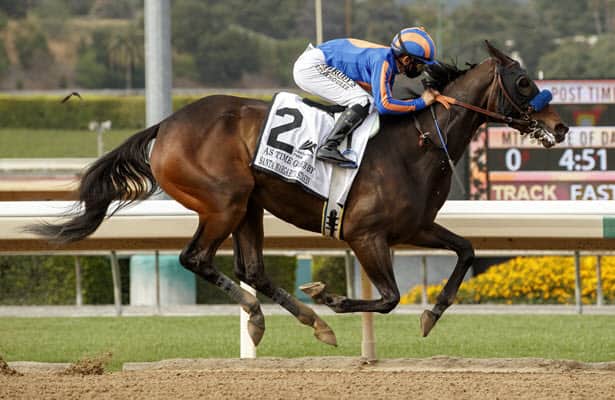 After a stakes-packed Preakness Stakes weekend, racing gets a bit of a breather this weekend, with only three graded stakes on tap.

Here is an early look at the likely fields for the three races, all on Saturday and all for fillies and mares.

Only six horses were nominated for this race, and Santa Anita stakes coordinator James Kasparoff said it might not fill. (Last week's Desert Storm (G3) also was cancelled because it did not fill.) But he listed three of the six as probables. As Time Goes By has finished in the money in each of her six starts, most recently winning the Santa Margarita (G2). Ce Ce bounced back from her fifth-place finish in the Breeders' Cup Distaff to win an allowance race and returns to stakes company. Miss Stormy D finished second in that allowance race and hasn't won in five starts since breaking her maiden in February 2020.

Madone won her first three starts before an eighth-place finish in the Breeders' Cup Juvenile Fillies. In her first start this year, she won the Señorita (G3). Golden crossed the line second in the Señorita but was disqualified to sixth for interfering. Going Global has won all three of her U.S. starts – including the Providencia (G3) and Sweet Life (G3) – after racing in Ireland as a 2-year-old. This is the first start for Midnight Diva since she broke her maiden in April on her fifth try.

A fifth-place finish in the Breeders' Cup Sprint is the only time in 13 starts that Frank's Rockette finished worse than second. Since then, she won the listed American Beauty and finished second in the Carousel. Sconsin hasn't won since the Eight Bells (G2) in September but finished a second to Gamine last out in the Derby City Distaff (G1) on the Kentucky Derby undercard. Palace Avenger has finished in the money in each of her last nine starts. But only one of those was in graded stakes company: a third-place effort in the Thoroughbred Club of America (G2) last October.