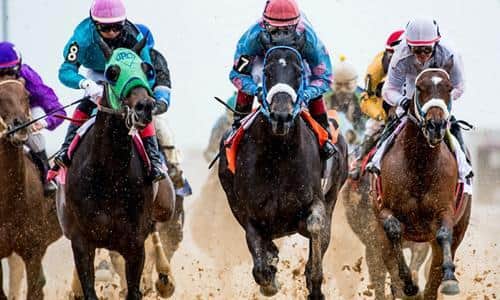 Racing will take a bit of a breather this weekend, but the three graded stakes on tap offer interesting matchups – as does the listed Pegasus Stakes at Monmouth Park.

[Belmont weekend runners: Here's where 11 are headed next]

Ny Traffic's allowance win on May 2 was his first race since a ninth-place finish in last fall's Preakness. Warrior's Charge would be coming back two weeks after finishing sixth in the Steve Sexton Mile (G3). Pirate's Punch won this race last year, when it was held in September, and would make his 2021 debut here after finishing 12th in the Breeders' Cup Dirt Mile. Basin won the listed Sir Shackleton in his first start of the year before coming in eighth in the Churchill Downs (G1) on the Kentucky Derby undercard.

Juliet Foxtrot's win in the Jenny Wiley (G1) was her first start of the year. She finished 2020 with a win in the Gallorette (G3) and a third-place finish in the Matriarch (G1). Hendy Woods started the year in allowance company, winning on May 14 at Churchill Downs. This will be the first graded stakes for Mintd, who sat out the second half of last year and won an allowance race on the Kentucky Oaks undercard to open her 2021 campaign. After racing once a month from December to March, Sister Hanan is expected to return here after taking off a couple of months.

Risen Star (G2) winner Mandaloun is expected to return here after his second-place (for now) finish in the Kentucky Derby. He'll face two other Derby starters, Brooklyn Strong, whose last win was in the Remsen (G2) in December, and Hidden Stash, who hit the board in three starts before the Derby, with a runner-up effort in the Tampa Bay Derby. (G2). Also expected is Gotham (G3) winner Weyburn, who was fourth in the Wood Memorial (G2) last out.

Bob Baffert is expected to enter Classier, who won by four lengths on debut then finished eight in the Breeders' Cup Juvenile and has not raced since. He also could bring Defunded, who broke his maiden in March and then finished fourth in both the Santa Anita Derby (G1) and the Pat Day Mile (G2). The Chosen Vron is 3-for-4 in his career, with the loss a third-place finish in the San Vicente (G2). Hockey Dad takes another shot at stakes company after finishing third in the Jeff Ruby (G3) and eighth in the Lexington (G3).