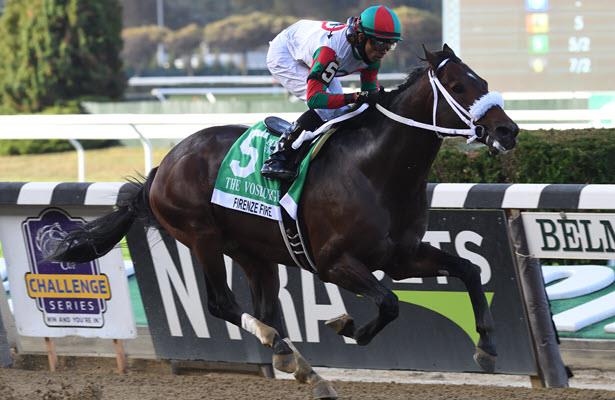 Firenze Fire locked up a bid in the Breeders' Cup Sprint and topped $2 million in career earnings with an authoritative win in Saturday's Grade 2, $150,000 Vosburgh Stakes at Belmont Park.

With Jose Lezcano in the irons, Firenze Fire stalked outside of pacesetter Share the Ride through fractions of :22.33 and :45.53 for the opening half mile in the six-furlong Vosburgh. Firenze Fire moved past the pacesetter at the top of the stretch and when confronted by a rallying Funny Guy to his outside, spurted clear of that rival to win by 2 3/4 lengths in a final time of 1:09.74.

Funny Guy got the place with Share the Ride holding for third. For Firenze Fire, the Vosburgh was his second Grade 2 win in five starts since joining trainer Kelly Breen. He was previously with trainer Jason Servis, who is under federal indictment for horse doping.

"Today, it was a small field, so I wanted to break good and he was in the bridle the whole way," Lezcano said. "When I asked him at the quarter pole, he took off."

Firenze Fire was exiting an 11th-place finish in the slop in the Aug. 29 Forego (G1) at Saratoga. Breen said he was unsure whether Firenze Fire would return for the Vosburgh after that effort, but a bullet drill on Sept. 19 signaled his readiness. The decision to run was rewarded with a likely third trip to the Breeders' Cup.

"He had a really nice breeze in :59 and could have gone faster," Breen said on America's Day at the Races. "That put us to where we are now, which puts us to the Breeders' Cup."

Firenze Fire is now 5 for 8 with a runner-up at Belmont Park. The Breeders' Cup Sprint is set for Nov. 7 at Keeneland Race Course.

"I can say he doesn't like the mud," Breen said, referring to the Forego. "You can put a line through his last race and he really performed today. He loves Belmont. We'll have to get him as used to Keeneland as he is to Belmont. I'll bring a couple of buckets from here and put it down the Keeneland stretch and bring our track to Keeneland."

Mr. Amore Stable's Ron Lombardi reflected on the latest performance from his stable star and the work of Breen.

"I think he's right there [with the best sprinters in the country]. There's no question about it," Lombardi said. "Kelly has done a fantastic job with him. It's our second win after everything [trainer change] and he's a solid horse. He always delivers and he recovers well. We'll decide after the Breeders' Cup what we're going to do, there's a lot of options but I love racing. If he does well there, it will be a tough decision [to send him to stud]."