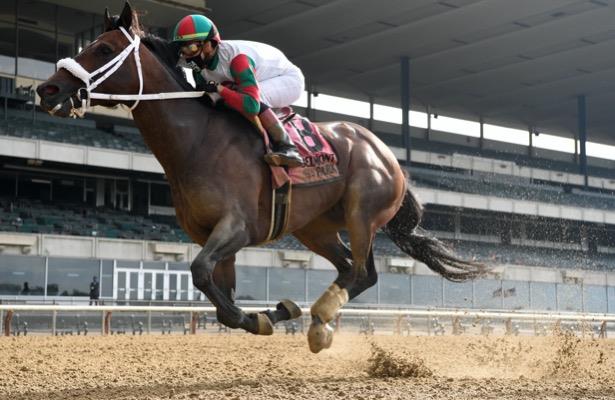 The six-furlong event over the main track is named in honor of the late Walter S. Vosburgh, the official handicapper for the Jockey Club and for the New York racetracks from 1894-1934, and is a Breeders' Cup "Win And You're In" event, which offers an automatic entry into the, $2 million Breeders' Cup Sprint on November 7 at Keeneland.

Owned by Ron Lombardi's Mr. Amore Stable and trained by Kelly Breen, Firenze Fire has won four of his seven starts over Big Sandy, including a 1 ½-length score in the Grade 2 True North on June 27 three starts back. During his juvenile season, the Florida homebred son of Poseidon's Warrior bested subsequent Champion 2-Year-Old Good Magic in the Champagne (G1) in October 2017 and was a runaway nine-length winner of the Dwyer (G3) in July 2018, where he earned a career-best 107 Beyer Speed Figure.

Boasting the highest amount of lifetime earnings in the field with $1.95 million Firenze Fire made a successful 2020 debut with a four-length win in the General George (G3) on February 15 at Laurel Park.

Firenze Fire will attempt to make amends after a distant 11th-place finish in the Forego at Saratoga on August 29. He breezed a sharp five furlongs in 59.20 seconds over the Belmont Park main track on September 17 in his first move since the Forego.

Jockey Jose Lezcano will have the mount from post 5.

Owned by R.A. Hill Stable, Gatsas Stable and Swick Stable, Funny Guy was a last out fourth in the Forego on Aug. 29 at Saratoga Race Course, where he finished a game fourth as the lukewarm favorite, beaten 2 ½ lengths over sloppy and sealed going.

"The conditions that day were just horrendous in that rainstorm," Terranova said. "There was so much water it was like a river down on the inside. He tried to make a couple of moves and didn't get beat far, but it just didn't work out."

The 4-year-old Big Brown bay has defeated his Empire State-bred counterparts at distances ranging from 6 ½ furlongs to 1 1/8 miles, including triumphs in last year's NYSSS Times Square at Aqueduct and the Albany at Saratoga. He began his 2020 campaign with a victory in the Commentator on June 12 going a one-turn mile over Big Sandy, where he garnered a career-best 101 Beyer and followed with a win in the John Morrissey on July 30 at Saratoga.

Funny Guy has trained forwardly since returning to Terranova's downstate division at Belmont Park, most recently logging a five-furlong move in a bullet 59.66 seconds on Sept. 20.

"The race looked like a good opportunity and I loved his workout the other day," Terranova said. "He's obviously shown that he's a versatile horse when it comes to distance and he's done well at distances like this one. He's doing great right now and this just seemed like a really good spot for him."

Funny Guy has shown versatility in distance as well as pace tactics. In the Commentator, he came from five or six lengths off the pace to victory and tracked just a length off frontrunners in his John Morrissey triumph.

"It's hard to say what he'll do from a pace standpoint," Terranova said. "He's a real smart horse and he just puts you right where he needs to be. He's the type of horse that you can do different things with."

Jockey Joel Rosario has piloted Funny Guy in his trio of starts this season and retains the mount from post 2.

"Joel knows the horse really well, he knows what he has underneath him," Terranova said.

Long Lake Stables' Stan the Man arrives at the Vosburgh off a victory as the favorite in the restricted Tale of the Cat on Aug. 20 at the Spa. The 6-year-old son of Broken Vow is in pursuit of his first graded stakes victory but has twice placed against such caliber with runner-up efforts at Belmont Park in the Westchester (G3) last May at and the True North (G2) on June 27.

"He's a good horse also. He's been a bit of an off-the-pace sprinter and he's able to do a few different things as well," Terranova said. "The good thing is that both horses are doing really well at the moment."

Hall of Fame jockey John Velazquez, a three-time winner of the Vosburgh, has the mount from post 3.

Calumet Farm's True Timber has put together a resume which includes eight placings against graded stakes company and lifetime earnings of $1,038,650, but will seek his first stakes win for trainer Jack Sisterson.

The 6-year-old Mineshaft bay was a last out third in the Forego (G1), when matching strides with Complexity in the early stages, but was unable to hold off a devastating late charge from Win Win Win and finished 1 ½ lengths as a 37-1 longshot. True Timber made his debut for Sisterson two starts back when running third in a 6 ½-furlong allowance optional claiming event at Keeneland on July 12 behind next-out winners C Z Rocket and Copper Town.

"Going into the Forego, we didn't think there would be too much speed, we thought Chad's horse [Complexity] would go out there and set the pace," Sisterson said. "We had the [Grade 2] Kelso [on Saturday, Oct. 3] in mind, but the Vosburgh ended up becoming more of a wide open race so we figured we would give it a shot. I think he's the type of horse that can run over just about anything. He just has a lot of class."

True Timber has run a respective second and third in the last two runnings of the Cigar Mile (G1) at Aqueduct. Sisterson said he hopes that third time is the charm for True Timber, and that he plans on pointing towards a third attempt in the $250,000 event set for Dec. 5 at the Big A.

"We're targeting the Cigar Mile at the end of the year with him," Sisterson said. "He's cutting back to three-quarters for this race and may stretch out next time. We'll just see how he does Saturday and take it from there. But for now, the Cigar Mile is the long term goal."

Jockey Kendrick Carmouche, who piloted True Timber in the Forego, will climb back aboard from post 1.

Woodford Racing's Engage will seek a victory off a nearly 11-month layoff in Saturday's race. Trained by Hall of Famer Steve Asmussen, the son of Into Mischief last saw action in the Breeders' Cup Sprint on Nov. 4 at Santa Anita, where he was fourth beaten four lengths to stable mate and Champion Sprinter Mitole. Engage will seek his third graded stakes victory having won the Phoenix (G2) last October at Keeneland over Grade 1-winner Whitmore and the Futurity (G3) at Belmont Park during his juvenile campaign in October 2017.

Jockey Jose Ortiz, who guided Takaful to a 2017 Vosburgh win, will ride Engage for the 11th time from post 6.

The 5-year-old son of Candy Ride will attempt back-to-back wins after a wire-to-wire triumph in the Mr. Prospector at Monmouth Park, which he won by 3 ¾ lengths while securing a 104 Beyer.