Firecrow will return from layoff in Turf Monster 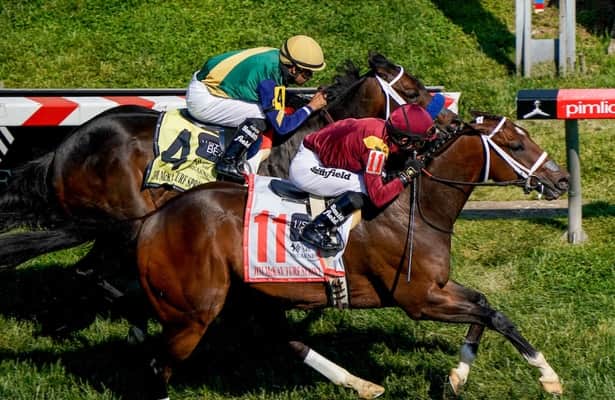 Firecrow is set to return to the races Saturday for the first time since winning the Jim McKay Sprint on Preakness Day at Pimlico. The Maclean’s Music gelding, who earned his first stakes victory in that race, is entered for the $300,000 Turf Monster (G3) at Parx.

Trainer Ron Moquett said the long layoff after the May 15 McKay Sprint was a needed rest for the 5-year-old.

“We had to take care of his feet,” Moquett said. “We wanted to give him plenty of time to address his feet. It all looks like it's going the right way, so we’re a go.”

Firecrow, the 7-2 second choice on the morning line for the Turf Monster, had run all of his career stakes starts on the dirt before winning the McKay Sprint. But his trainer said the win did not surprise him. He had run on the grass previously, including a race at Keeneland where he finished third behind Fast Boat and Texas Wedge, both graded-stakes winners on turf.

“He ran, I thought, the best race of his life, sprinting on the turf,” Moquett said.

The gelding, who will be ridden by Joel Rosario, leads a field of 12, plus an also-eligible, going five furlongs on the lawn. The field includes Belgrano, who won the Rainbow Heir at Monmouth Park in his most recent start, as well as Battle Station, who finished second in the Parx Dash (G3), and Carotari, who was the runner-up in the Troy (G3) at Saratoga.

The 9-5 morning line favorite is Caravel, who finished third in the Highlander (G1) on Aug. 22 at Woodbine after winning the Caress (G3) at Saratoga.

In his last start, Firecrow pressured the lead for most of the race before closing in the last several yards to take the win at the wire. Moquett said he would like to see a similar trip on Saturday.

And if the gelding gives a similar performance in the Turf Monster, he could get the opportunity to prove himself even further.

“Breeders’ Cup,” Moquett said. “He does well in this race, he’ll go straight to the Breeders’ Cup.

The Turf Monster is carded as Race 9 on Saturday at Parx. Scheduled post time is 3:51 p.m. EDT.